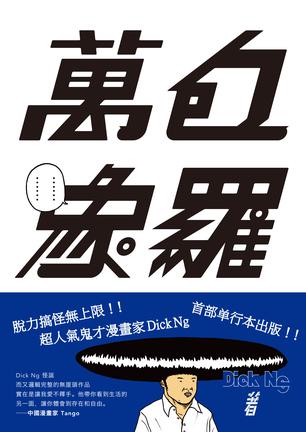 Ng’s webcomics are snappy, short and whacky. His comics are native to Weibo (a Twitter-like service), his strips thrive as self-contained, single-page gags. While other cartoonists in China might publish 100+ page works on Douban (a Tumblr-like service) or one of the many webcomic portals (e.g. 有妖气), Ng focuses primarily on creating short comics on Weibo where he’s amassed an impressive 58,000+ followers. Works: All Phenomena is a collection of these webcomics from 2011 to 2013.

Absurd, slightly grotesque, and full of puns, each strip in Works: All Phenomena is brimming with energy, whether it’s the way a character rushes into battle or… to the toilet. Each comic is a self-contained gag, and the setting flits freely between contemporary, sci-fi, fantasy and wuxia (武侠). Ng’s humor shines when he combines both visual and verbal puns to set up a joke:

Almost every strip in Works: All Phenomena follows this fast and powerful rhythm. The stories move quickly, boldly, and there’s something ruthless and delightful in the way they execute their punchlines.

Ng’s stark and gritty illustration style is a perfect match for his stories. First of all, gags are clearly communicated with bold, black lines on sparse, white backgrounds. Then, their humor is enhanced by the seemingly-limitless repertoire of bizarre facial expressions that Ng’s characters possess. The combined effect is that there’s almost nothing subtle about Ng’s jokes, and they’re far stronger (and funnier) because of that.

Ng continues to create and publish webcomics on Weibo to this day, and he’s recently announced that a second collection of his comics may soon be published. While the number of verbal puns makes Works: All Phenomena an unlikely candidate for translation, perhaps a select collection of his equally-powerful visual gags will make it onto English-speaking shores one day.

Purchase the book from JD.