The Kylooe trilogy brings us three stories of people who are trying their best to fit in with society. In book one, a shy, introverted schoolgirl struggles in her first days at a new middle school. In book two, a broadband salesman reminisces about his first, failed love. And finally, in the last book, a delivery boy finds himself stuck in a world where laughter is forbidden. In each of these stories, author-illustrator Little Thunder takes us deep into the inner worlds of her characters. We experience events from their perspective: with joy and anguish, curiosity and surprise. 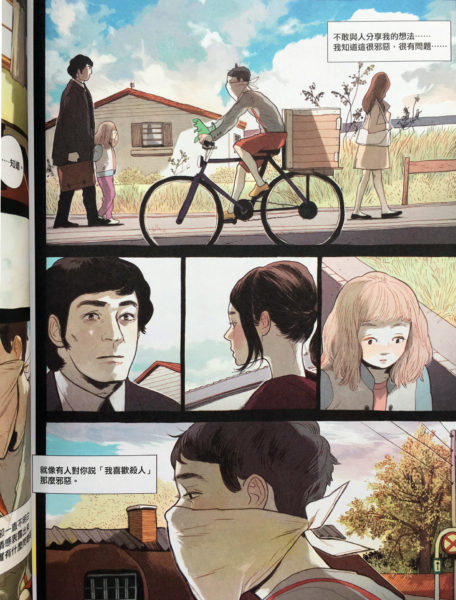 Although Kylooe is technically a work of fiction, it is also a deeply autobiographical work. As Little Thunder states in the preface, the trilogy is stamped with emotional footprints of the author’s own coming-of-age, which occurred in parallel with the books’ six-year production period. This may explain why the stories in Kylooe feel so intimate and raw, though much of that could simply be attributed to Little Thunder’s remarkable visual-storytelling ability.

The storytelling in Kylooe shines for several reasons. First, Little Thunder writes with a slow but deliberate pace, letting important moments linger to draw attention to them. Secondly, she uses consecutive close-up shots of her characters’ faces to show how their emotional state subtly shift from panel to panel, page to page. Lastly, she uses narration only sparingly, allowing the pictures and dialogue speak for themselves, and allowing us to immerse ourselves in her illustrations.

And what illustrations they are:

Kylooe is an unconventional and ambitious work. On top of some incredibly rich illustrations, the comics also possess a quiet, emotional depth that’s rarely found within the medium. One caveat though: there is currently no English edition of Kylooe, so I hope you’ve been brushing up on your French, Italian or Chinese.

One comment on “Kylooe: an emotionally-charged comics trilogy about trying to fit in”