I LOVE this: If you feel like chatting via text or voice with random strangers in mainland China, and you live anywhere in the world, download the free Tencent Weixin app for your iPhone or Android phone.  My latest favorite thing to do with a few minutes of boredom: check my Weixin for any “drift bottles” that have been thrown into the digital ocean with messages inside them. 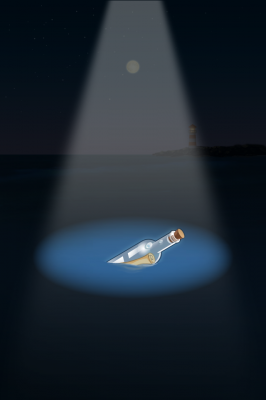 Here the bottle floats in a night-time ocean, I guess because it’s evening in Haidian/Beijing, where it thinks I’m from (the Weixin version I have on my phone didn’t allow me to input an location outside of China (update: of course, it knows where I am anyway with location tracking). Without video you don’t have to worry about acres of naked strangers, but you can still have a pretty good conversation in more-or-less realtime with instant voicemessaging. Yes, there are still lots of guys looking for MMs but you can just throw those bottles back.

I’ve thrown out my own drift bottles in spoken English and Chinese and had chats with people in Beijing, Wuhan, Chengdu, and Taibei about random life-y details, and there was one soliloquy by a young Beijinger about finding love after the age of 25.  Just this evening I picked up a bottle that said: I’ve made too many mistakes, I’m afraid, and I don’t want to go on. I wrote back: Don’t be afraid, everything will be okay. Received a thanks. Hope it helped.

Since the start of the year my voice functionality for throwing or replying to drift bottles has inexplicably disappeared, but am assuming it’s a version problem and hoping it goes back to both. I agree with TechRice’s Sunny Ye that 2012 should be Weixin’s year — and maybe not just in China…Not only are there lots of people who could practice Chinese by using it, but there’s nothing like it in the mainstream US app space and I, for one, am trying to get my colleagues and friends to adopt it as well.  The walkie-talkie like voice-messaging makes voice calls much more convenient and fun for those of us who don’t love talking on the phone in realtime.

Update: threw out a drift bottle asking about why I couldn’t use voice feature anymore and apparently lots of people are having the same problem after the recent upgrade.  If you friend the person, you can talk directly with them…but the whole point is that you might not ever want to connect with them again.  If you use the “shake” feature, though, which tells you where someone else is shaking their phone at the same time, you can connect with people directly via voice. Since I’m in the US, I get linked with people who are 9000+ kilometers away, shaking their phones in a time zone 16 hours ahead…