My Beloved Mother (机器妈妈) is a science fiction tale of dystopia about the frayed relationship between a boy and his android mother. Originally serialized in 漫友·动画100, the comic has won multiple awards, been re-published in Malay and English, and helped launch the career of its creator, Wang Xiao Yang. Today, we turn back to the clock to look at the original 2004 work as well as examine the trajectory of its various awards, translations and releases. 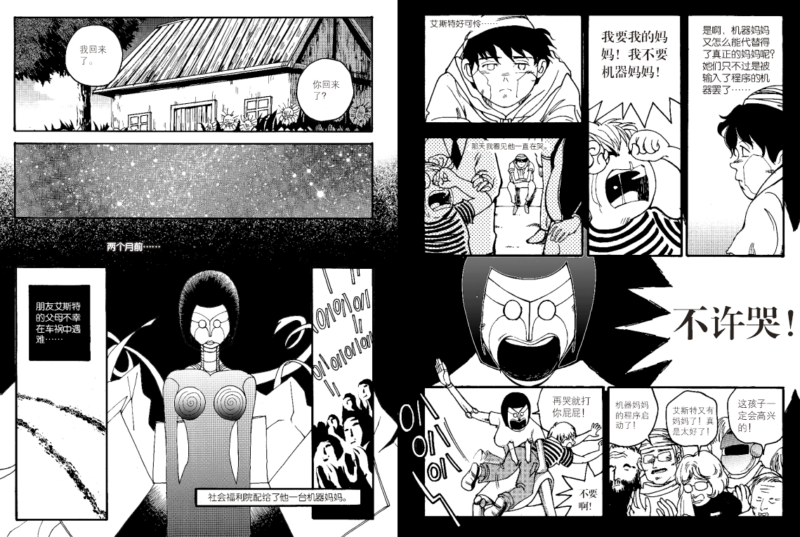 At first glance, My Beloved Mother looks and reads like Japanese manga, but with panels flowing from left to right. The illustration style is charming and expressive, though it lacks the technical and anatomical finesse found in most mainstream Japanese comics. Luckily, the pacing and storytelling are solid, and Wang carries the story forward with a brisk, fast-rolling momentum.

The story is at its core about the bond between a boy and his android mother, which is put to the test in a future plagued with human-android discrimination. We follow the boy in school and as he tries to find his own path in life, torn between the genuine love he feels for his mother and the embarrassment he holds for having an android (single) parent.

Structured as a parable, the book jumps from one grand gesture to another, with only minor attention paid to the characters and their settings. This is both the comic’s strength and weakness. On one hand, it would not otherwise be able to explore such epic themes through space and time in a span of 270 pages. On the other hand, it feels at times like a mad rush atop a roller-coaster of adolescent emotion. Either way, the twists and turns and ever-changing bond between parent and son are a sight to behold and, for the most part, well executed under Wang’s steady hands.

The critics definitely appreciated its merits as well as its positive messages around life and love. In 2004, it won the Best Screenplay Award for a standalone comic at the inaugural CACC Golden Dragon Award (金龙奖), and in 2012, it was given an award by the Ministry of Culture, one of the highest honors available to comics in China. Meanwhile, author-illustrator Wang Xiao Yang, also won two other Golden Dragon Awards in 2005 and 2006 for other works, all of which no doubt propelled him forward as he branched out as a singer-songwriter, novelist and celebrity in the ensuing years.

The publication trail of My Beloved Mother also forms an interesting side story of a comic trying to make it in and outside of China. On top of being serialized in 动画100, My Beloved Mother was published in book form in China in both 2008 and 2013, by the Guangdong Provincial Publishing Group and Changjiang Press respectively. Outside of Mainland China, it was translated and published in 2009 in Malaysia and in Singapore, before it was picked up in 2013 by Joint Publishing in Hong Kong as part of their short-lived Made in China Comics (國產漫畫) series. Yet while Wang Xiao Yang has become a minor celebrity within China (sporting 85,000 Sina Weibo fans at one point), his works have sadly only made a small dent outside of China – there are only scant references to his works online in English, Malay or Traditional Chinese.