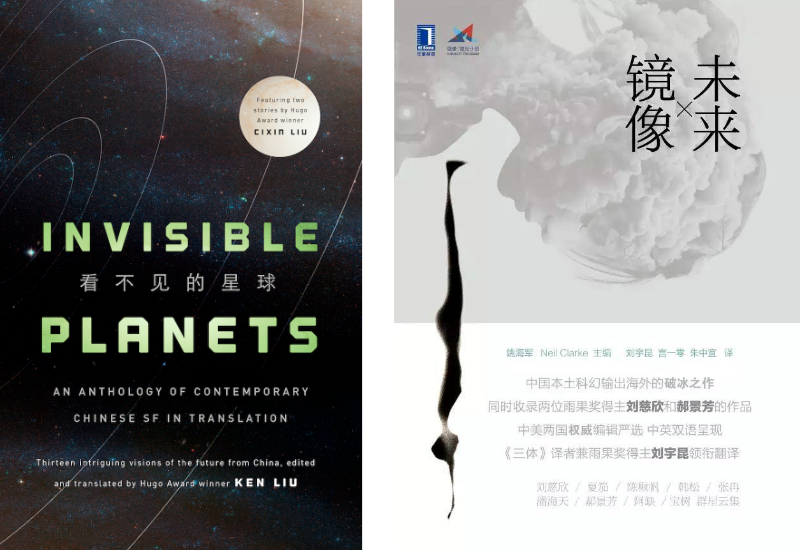 Science fiction in China is finally enjoying its moment in the spotlight again, more than three decades after it was snubbed as a form of “spiritual pollution” by the government. Its recent success – with its bestsellers at home and numerous awards abroad – has led to a growing interest from literary and science fiction communities around the world. Capitalizing on this momentum, publishers have launched not one but two English-language short story anthologies within the past year: Invisible Planets and Touchable Unreality.

The two books share a common core group of authors. Both volumes feature works by three of the new generation’s most prominent sci-fi writers (Xia Jia, Hao Jingfang, Chen Qiufen), contain many stories translated by Chinese American heavyweight Ken Liu, and end with a work by Liu Cixin, the veteran, award-winning author of The Three-Body Problem.

Though no single idea permeates through all of the stories, certain themes and motifs do recur. As Xia Jia states writes of the work by herself and that of her brethren, “The problems we care about and ponder are the problems facing all of us sharing this plot of land.” Indeed, setting and place play an important role in many of the chapters in both collections, whether it’s the dystopian stratification of a mechanically Folding Beijing, or the lofty urban development dreams of Yuanyuan’s Bubbles. What’s more these environments, whether urban or rural, feel tangibly Mainland Chinese.

Close family relations also feature prominently within many of the selected stories. From the eccentric animated grandparents in Tongtong’s Summer/Taking Care of God/Summer at Grandma’s House to the saccharine father-daughter relationships in Folding Beijing/Yuanyuan’s Bubbles, close family ties motivate characters and create tension with a greater frequency and intensity than what I’ve experienced in Western or Russian science fiction.

Lastly, while Western readers might expect many tales about dystopian censorship, each volume only devotes one story to the topic. This is a shame because the stark sterile worlds depicted in The City of Silence and Ether, along with the inventive workarounds of their protagonists, are clever, gripping and stray far from the the conventional Western tropes of authoritarian surveillance.

Invisible Planets and Touchable Unreality do differ though in their origins and their selection. The former is an anthology of short stories that the US-based Ken Liu has translated over the years, bookended with short introductory essays about science fiction in China today. Touchable Unreality, on the other hand, is a collaboration between American sci-fi/fantasy magazine Clarkesworld and Chinese media company Storycom. The book itself acts as a physical manifestation of this partnership: it includes both the Simplified Chinese and English language editions of its stories, one after the other.

In terms of their selection, Invisible Planets shines because it includes Hao Jingfang’s Folding Beijing (2016 Hugo Award for Best Novelette), three of Xia Jia’s most vivid and poignant stories, as well as the aforementioned series of introductory essays. Touchable Unreality shines because its selection is more raw and more Chinese. Where Invisible Planets is carefully curated and packaged for Western audiences, Touchable Unreality simultaneously targets both audiences in China and the US, and was first published in China. So it is Touchable Unreality that features Chen Qiufen’s witty tale about a WeChat viral sensation gone wrong as well as Liu Cixin’s story set in a failed futuristic ghost town of remote China.

Purchase a copy of Invisible Planets from your favorite local bookstore or on Amazon. Purchase Touchable Unreality from Dangdang, or if you’re outside of China follow the Shimmer Program on Facebook or Twitter to be notified of its release.