Editor’s note: Below is a select excerpt of An Xiao Mina’s Instagram posts from her recent trip to China. 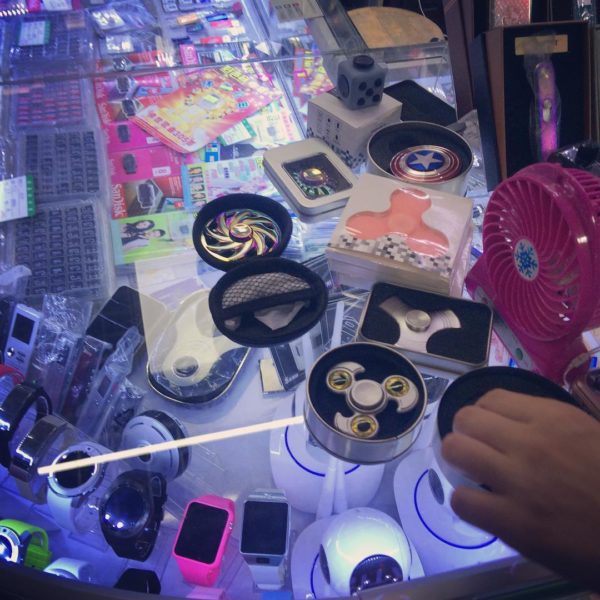 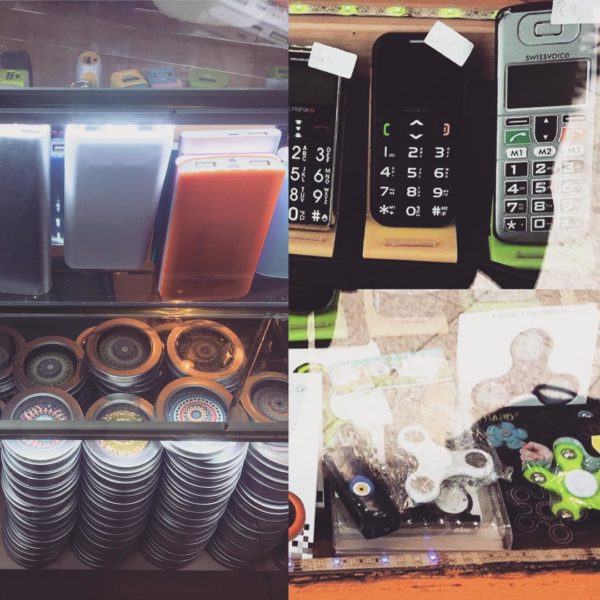 Right: Fidget spinners sold alongside phones and accessories in Berlin.

The fidget spinner went global when I was in Berlin, and I watched it first arrive in the hands of Arab and Turkish immigrants, in small grocery stores and phone kiosks that catered to the immigrant community. The path to the global virality of hardware memes is, I suspect, built on shanzhai phones and accessories, which already have established trade routes and distribution methods. 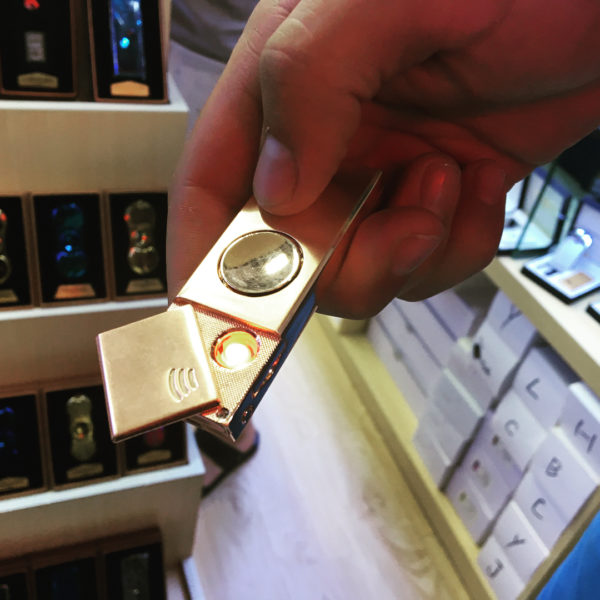 A fidget spinner and lighter mashup spotted by friends Jason and Larissa. One arm has a lighter function — basically, a heated surface that can light a cigarette. The device is charged by micro USB. Like any good meme, fidget spinners draw on long precedents, which predate shanzhai culture and give a hint as to deeper cultural undercurrents that they tap into. I think back to Greek worry beads (kombolói), but also, appropriately, to cigarettes, which this invention clearly understands. 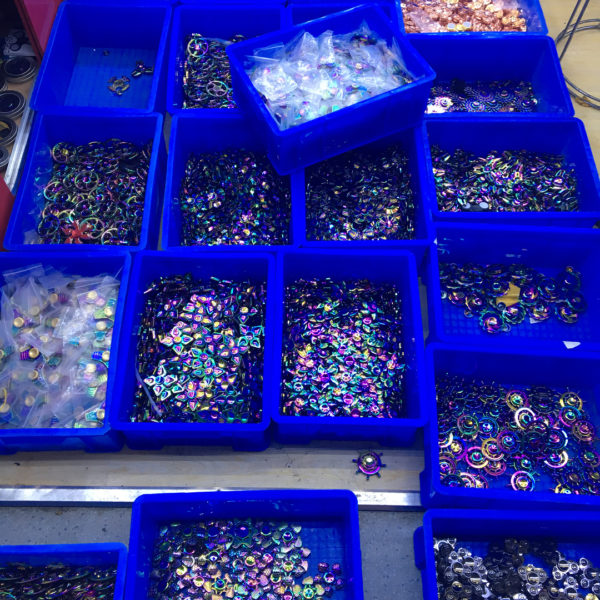 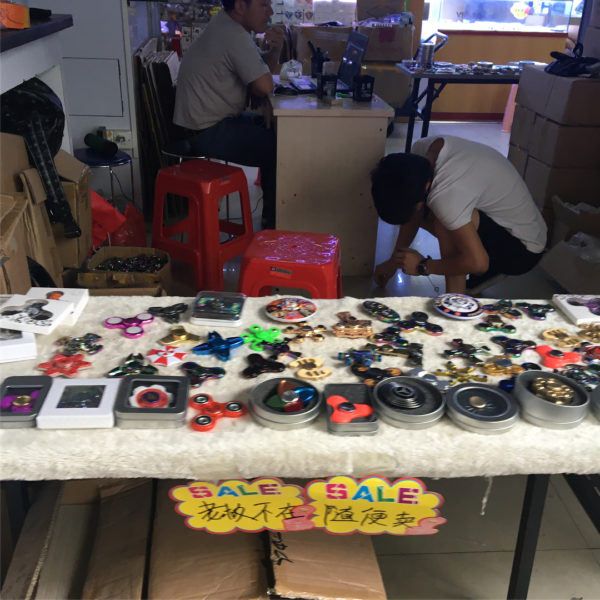 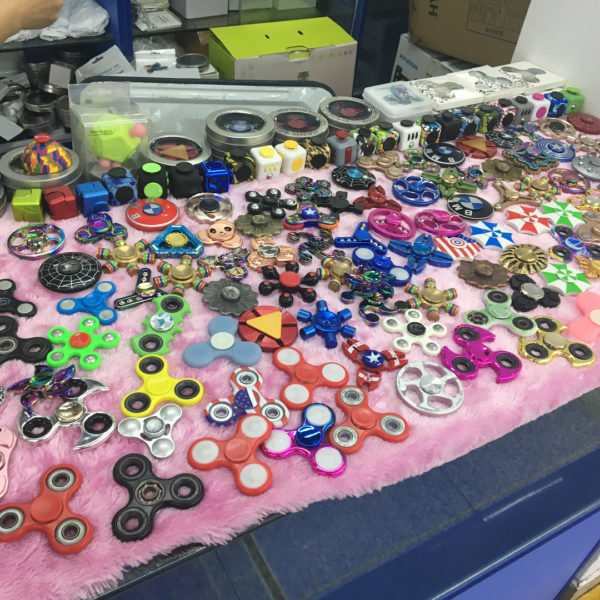 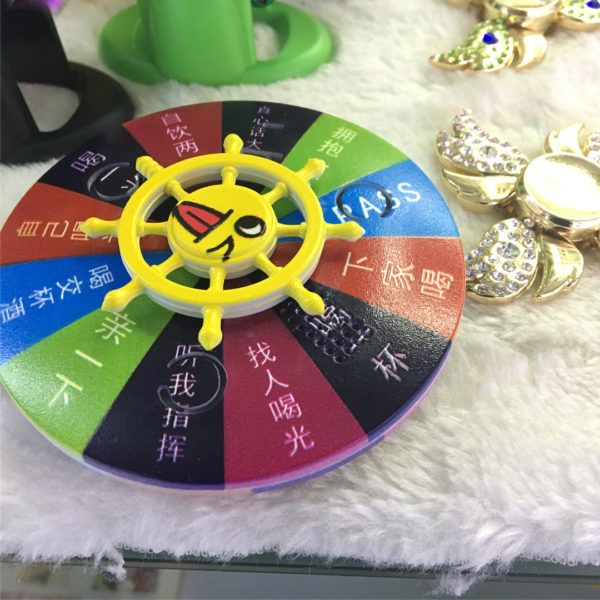 To understand shanzhai production in Shenzhen, I find it helpful to look at digital precedents. The copycat narrative is both myopic and dated. In the book Spreadable Media, Prof. Amanda Lotz contributed an essay about media production in an environment of uncertainty: “The primary strategy for dealing with the uncertainty of success is intentional overproduction.” In other words, make a lot of things and see what sticks. We are accustomed to this process in media, whether professional entertainment media or internet memes, especially as costs of production and distribution have gone down. And with shanzhai products in China, we can see this strategy in place: intentionally overproduce something like fidget spinners and see which designs and ideas stick online, in the local market of Huaqiangbei and internationally.

The bleeding edge of the internet of things 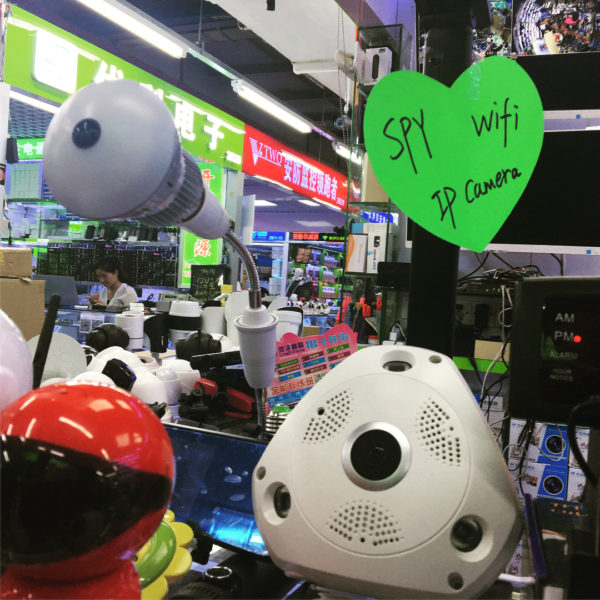 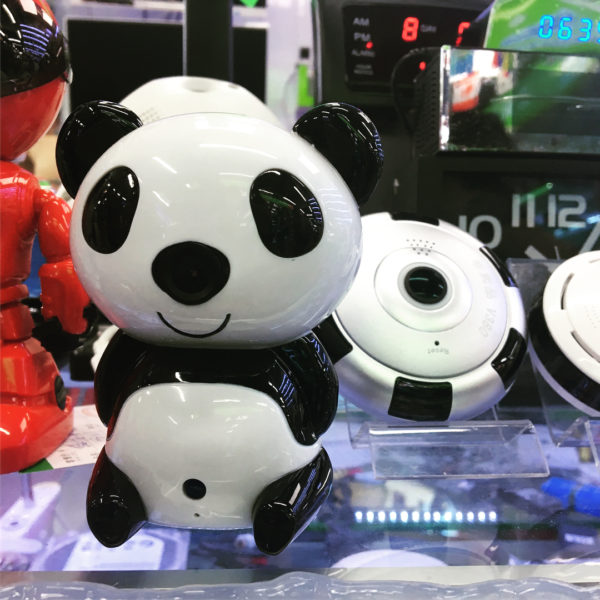 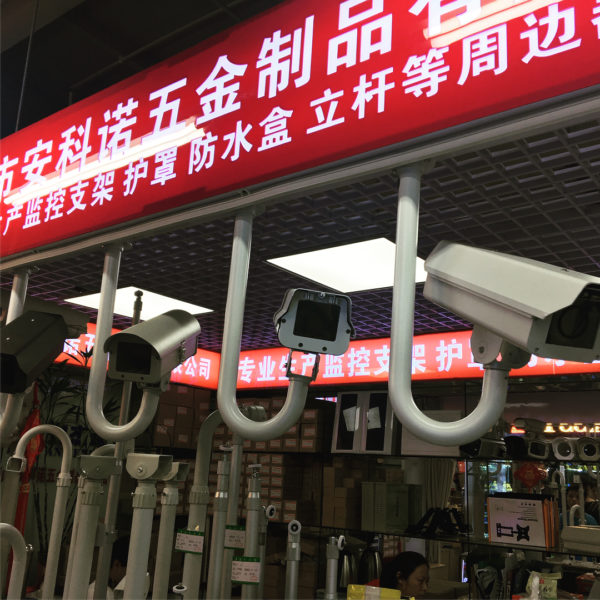 All of these things, including the (functioning) light bulb and the panda bear 🐼 have cameras for transmitting live streams. What happens as this scales up? What are the implications for surveillance and voyeurism? For documentation of police brutality and human rights abuses? Welcome to your privacy nightmare, though if there’s anything we’ve learned from the past few years, cameras can also empower the vulnerable under certain circumstances. (With thanks to @taweili for the tour.) 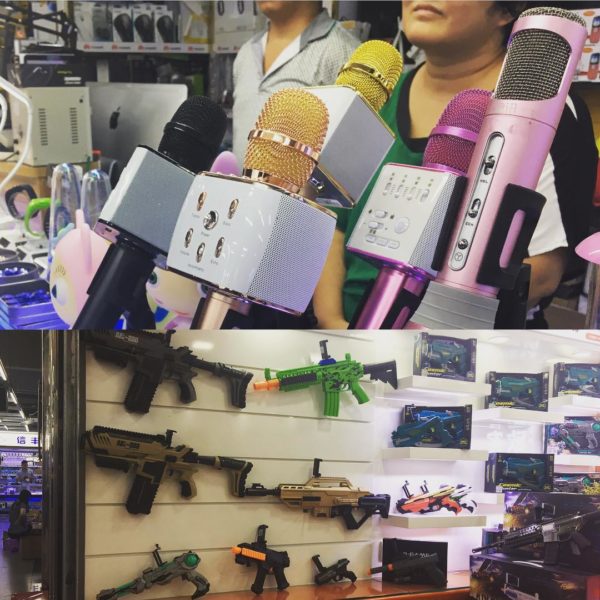 Used to be convinced the karaoke mic—both self playing ones and ones connected to your phone via Bluetooth—would take off globally soon but now I’m wondering if the augmented reality gun—plug in your phone and start shooting—will instead. As I understand the influence of the internet on this pipeline better, I realize a lot of what helps object memes go viral globally is a slick marketing campaign for one design that causes a cascade for all the others (just like a digital meme). Both the karaoke mic and the AR gun have a lot of potential energy, IMO, and a smart marketer will figure them out soon.

Other sights & sounds around town 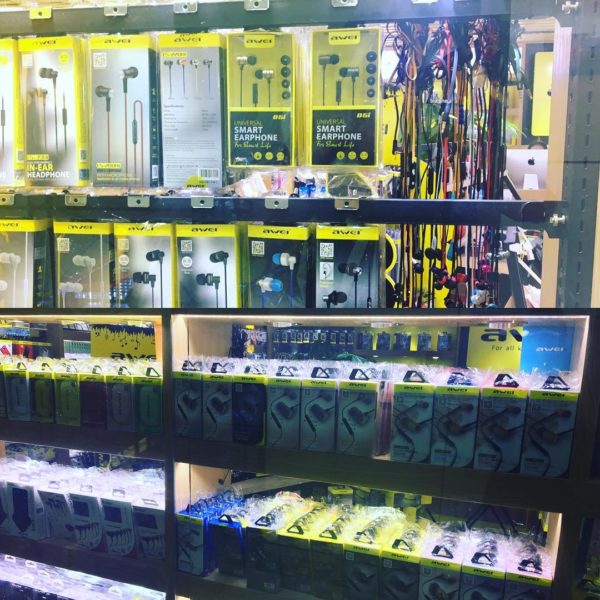 Bluetooth earbuds for under US$3. This felt significant to me — it’s an implicit acknowledgement from the market that the iPhone 7’s lack of earphone jack might just be presaging a larger trend. That the price point is so low enough to compete with wired headphones currently in the US market suggests that we will start seeing these in more places. That said, more work is needed: with the headset I bought, a single charge lasted about half a day — or maybe my use case isn’t the target one. 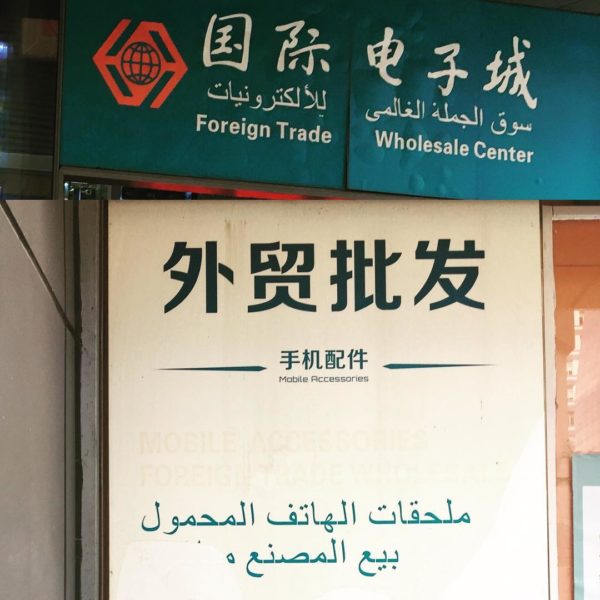 Pay attention when you see convergences like this: the three most frequently written scripts in the world — Chinese, Arabic, Latin — and, besides Spanish and Hindustani, a reflection of the most spoken languages too, when you consider second language speakers. Malls signs like these contain billions of stories within the gigantic microcosm of Shenzhen: the history of language, globalization, trade, a city less widely known than Los Angeles or London but whose global reach is arguably as impactful, and increasingly so. 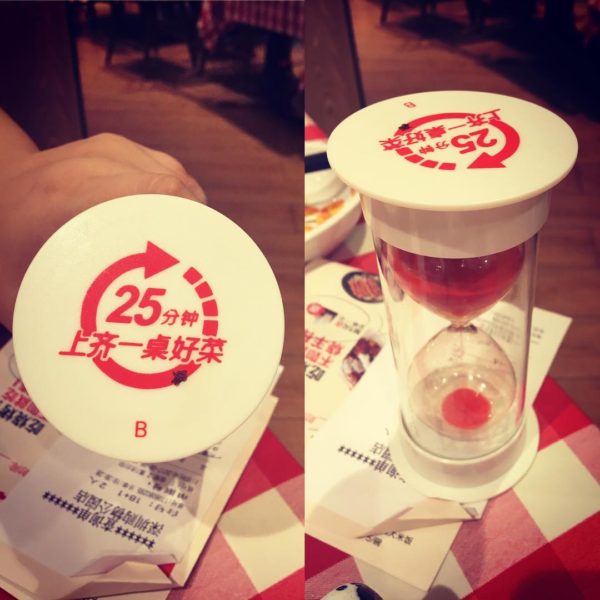 The ethos of Shenzhen Speed (深圳速度) reaches unexpected places, like this sit-down Shaanxi restaurant in Coco Mall that guarantees a free meal if all your food isn’t out in under 25 minutes.

Got obsessed with rain cover designs for motorcyclists and cyclists in Kunming and filmed a few variations as people zipped by — a tarp to cover bike and person, a tarp for two, an umbrella on a stand, an umbrella in hand, a covered wagon. The tarps in particular double as a tarp for your bike when it’s parked. And then I met Mark Clifford (@mouscula), who had the perfect soundtrack for this little study.