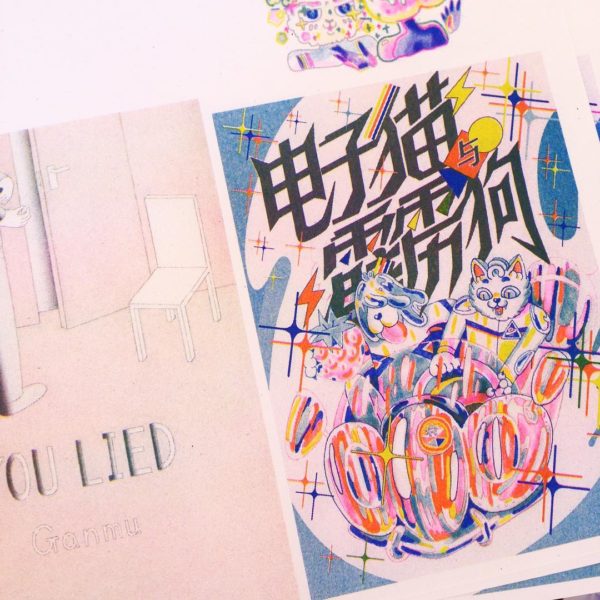 Paradise Systems is a new player in the comics publishing world specializing in independent comics from China and the US. Ahead of their book launch in Brooklyn this Thursday, we sat down with their co-founder Orion Martin to talk about the new venture.

Few people realize that there are thriving communities of commercial and independent cartoonists working in China. Perhaps because mainland China uses different social media platforms, there’s little contact between Chinese cartoonists and audiences outside of China. There’s a misconception in America that there are no creative professionals in China making interesting work, and that’s ridiculous. These are fantastic books that deserve a wider audience.

Q: Why publish these two specifically?

Ganmu works in a tightly structured style that makes her illustrations appear almost like geometric constructions. Within this stylized world, she focuses on the dynamics of personal relationships like love and bullying. There’s not much text in these comics — they rely instead on surreal settings and unspoken gestures to carry the narrative.

As for Bu Er Miao, when I first read her comics, I was immediately drawn in by the goofy, free-flowing nature of her stories and their neon-tinted illustrations. When I think of her work, I think of cartoonists like Inés Estrada, whose stories have a similar friends-hanging-out-and-one-thing-leads-to-another feel to them.

Ideally, comics are an immersive sensory experience. I feel swept into the world of the comic when I’m laying on my couch reading, but I find it difficult to make that connection through a screen where I’m simultaneously using other applications or checking my email.

I’ve also always found the physical nature of printed comics delightful: the look of the ink printed on paper, and the fact that the book moves through the world in unexpected ways. There are so many things you can do in a printed book that are impossible on a screen. On that front, Taiwanese publisher nos:books is a great source of inspiration. Many of their books require novel forms of interaction (cutting open the pages in Chihoi’s Pink Freud, scratch-off illustrations in Feng b.’s Nothing about dinosaur).

Q: Beyond offhand compliments that it’s “cool,” how have people responded to what you’re doing? Have people pre-ordered, offered to distribute, offered to write about, etc.

Until now, my focus has been on making the books themselves as good as they can possibly be. So while I started working on these last winter, I’m just now moving into a phase of outreach and distribution. People I’ve shown the work to in the New York comics community have been extremely supportive, like TXTbooks, which helped me finish printing Electrocat and Lightning Dog on their risograph, and Gabe from Desert Island Comics who agreed to host the launch party. Chinese cartoonists and publishers I’m in contact with are also excited, and it has been very encouraging for me to feel supported by the community I want to work with.

Q: Lastly, where can English readers find out more about Chinese comics?

With so few English-language articles being written, I recommend looking at the publishers and cartoonists who are active in China. Bananafish Books is a Shanghai-based publisher that has done a magnificent job bringing the work of Chinese cartoonists into print. Though many of their books are in Chinese, they have some English language resources on their website. Special Comix (SC漫画) is a loose organization of Chinese cartoonists that self-publishes massive anthologies. I reviewed their most recent anthology here, and I think the range of work they feature is a good primer for people interested in all the different forms Chinese comics take. Other than that, resources like Nick Stember’s blog and, of course, this site. Part of my plan for Paradise Systems is to highlight the work of Chinese cartoonists not only through our books but also through our social media.