On the way back to Shanghai from our fieldwork trip in rural Guizhou, Tricia and I decided to go shopping at Guiyang’s Hunter City Mall. Guiyang is the capital city of the poorest province in China, but it’s recently attracted server farms from massive tech companies like Tencent and Alibaba and, with them, wealth and jobs. The mall recently went up near the fancy hotels, serving this new wealthy clientele with high-end Chinese boutiques and international brands like Uniqlo.

Wandering through the mall, we found ourselves in Croquis, a menswear boutique with enough dark tones and mesh paneling to pass for a store in SoHo. As Tricia paid for a bag she liked, the clerk held out a comically large QR code encased in a slab of plexiglass and asked if she wanted to join a VIP membership program that would offer discounts and other perks. Scanning the QR code took Tricia directly to a signup page housed in Croquis’s WeChat brand account, but she had trouble finishing the process. 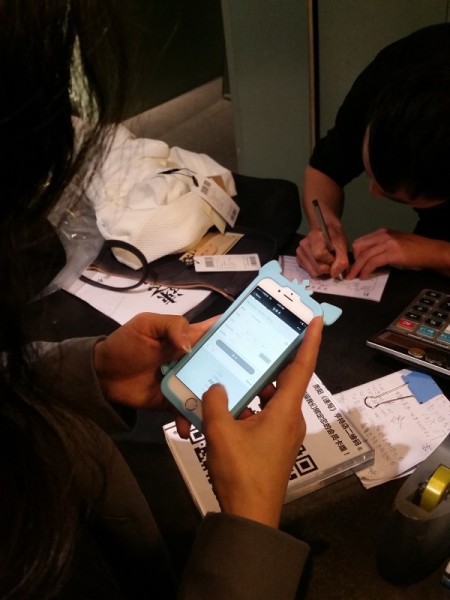 “Sorry, this happens all the time,” the clerk said sheepishly. “The cell phone signal is terrible in here.”

A few years ago, if I was trying to pass in a circle of technologists and designers, I’d bring up the website Picturesofpeoplescanningqrcodes.tumblr.com for a good laugh. The site’s joke is that it’s a blog with no posts. The implication: outside the optimistic daydreams of artists and ad agencies high off of the promise of digital/physical transcendence, almost no one actually stops to scan a QR code they walk by.

Fast forward to 2015, and the joke still works in the US. The tech-embracing among us may actually use QR codes quite often — while boarding flights and trains, to get into music shows, to pay for sandwiches using LevelUp — but the interaction always involves holding up our codes to someone else’s scanner, never the other way around. Except for the occasional optimistic marketing campaign, the noisy grids have dissolved quietly into product packaging and subway ads.

In China, however, people scan QR codes all the time.

There are two major factors that give QR codes a leg up in China:

1. For most Chinese people, the typical URL for a Chinese site is only slightly more human-readable than a QR code. URLs use alphanumeric characters, and the Chinese language mostly does not. Pinyin has been taught in schools since its adoption in 1958, but it’s still not necessarily an intuitive way to express the language for most Chinese people. In fact, some of China’s most popular websites use numbers in their URLs because even rough homophones are still more semantically meaningful (and convenient for users’ input systems) than pinyin. Alibaba’s Chinese portal, for example, is hosted at 1688.com because the numbers are pronounced “yao liu ba ba.” QR codes abstract away the need to memorize these arcane URLs altogether.

2. The install base for QR code scanning capabilities is simply way larger. The typical American mobile user probably doesn’t even have a general purpose QR code scanner installed on their devices, let alone one they have regular occasion to use. Most Chinese mobile users, on the other hand, use Weibo and/or WeChat, both of which have prominently-integrated, reliable scanner features.

Combined, these two factors mean that QR codes are everywhere in public spaces in China, both as pixelated portals to the digital world and as identity verification.

They’re even in digital public places, floating above the fold on most major websites. QR codes displayed on screens make me anxious — remember Facebook Rooms?  — but the use case here is clear. Like lighting a torch from a bonfire, a user aims their mobile phone at their laptop, scans the code, and takes whatever they were looking at to go.

What’s more interesting to me, though, is how QR codes are used in interpersonal settings.

Some of my first interactions with QR codes in China were around WeChat, which generates a code for each person and group in the system. WeChat offers several different options for “friending” someone you’re sitting next to, but the QR code is the one I saw used the most.

The logical extension of this is QR codes printed on business cards or propped up as signs in offices. Like taking selfies in front of landmarks or saying Instagrace, scanning someone else’s code has become integrated into social rituals.

This is why QR codes are perceived as so powerful in China by marketers, and why they’re so commonly used as retail tools. But like any other tool, the QR code has its limitations. One is, as we saw in Croquis, performance in low-signal settings; the other is simply people’s tolerance for advertising.

Back in Guiyang, while Tricia finished up her checkout process, I slipped next door to Riverstone, a fashion chain based in Chengdu with funky prints and a few stores around the Southwest of China. A QR code taped near the cash register caught my eye — its plastic lamination cracked and curling with wear — so I asked the clerk if I could scan it. He was surprised at my interest. The code was there by mandate from the chain’s headquarters in Chengdu, he told me while trying to smooth down the plastic, but most of their customers preferred to add the salespeople on WeChat directly rather than follow the official store account. Some even go a step further.

“Real VIPs don’t want to bother with scanning, so they just give us their phone number directly,” he said. “And you, what, call them?” I asked, slightly horrified. “Yeah, we call them personally when there are sales and when it’s their birthday. It’s more special that way. They’d ignore texts and WeChat messages anyway — it’d just be more spam.”

At least where sales are concerned, sometimes elegant interactions are just no replacement for messy human warmth.

I have to confess: I’ve been rooting for the QR code all along. Partially, I think, because of its aesthetic inelegance, and partially because it seems fleeting. Like an AOL CD or a pianist at a silent film, the QR code is an awkward stopgap solution that can only exist at a particular moment of transition; an artifact of an era in which we made clumsy compromises about the transition between digital and analog spaces. I want them to mar my visual landscape like the gritty, visible residue of the internet springing leaks into the real world.

Maybe I’m wrong about their pending obsolescence, though. Scanning a QR code is a gesture, and all gestures (taking a selfie, 1–4 kisses on the cheek) can be awkward to learn. The alternative is one we’re increasingly familiar with: digital interactions designed to be “seamless,” which is to say invisible and outside of our control. No one scans a QR code without clear intention. Maybe, in the near future, we’ll find that refreshing rather than antiquated.

Christina Xu is an organizational designer, ethnographer, and enabler based in New York.

This is her WeChat QR code. 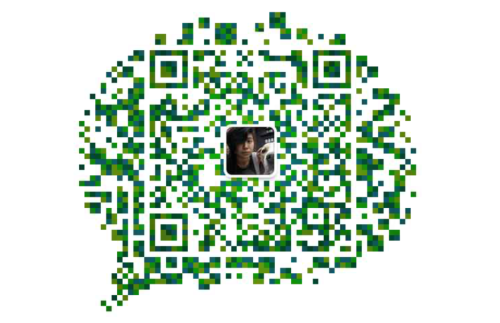