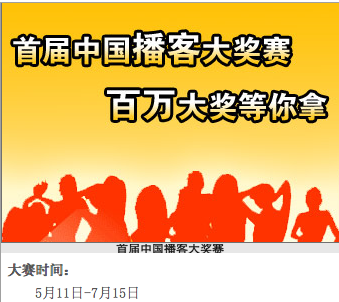 Chinese portal Sina.com, which has one of the “good,” officially sanctioned video clip websites, is now holding a massive video blog 播客 contest which will end on July 15th.  According to the press release, actor Jacky Chan, directors Feng Xiaogang and Zhang Yuan, painter Fang Lijun, and the Asian Backstreet Boys aka the Backdorm Boys are among the judges, and of course there will be online voting. They are giving away prizes totaling more than 1 million RMB (~ US $128,000).  Prizes will be given in categories of self-made 自拍, short act 短剧, remix 改编, lip-synching 翻唱, animation 动画, and spoof 恶搞; and will belong to (excuse the Chinglish here, please) either Family Life 家庭生活, Creative Remix 创意改编, Situational Short 情景短剧, Accomplished Performance 才艺表演, or Social Documentary 社会纪录.

Entries will be accepted from individuals as well as from organizations.  Three top prizes will be awarded for “Best Original Video, Most Recommended Video, and Best Organization Video.” CCTV will be airing some of the winners.

Enough of the details!  Go see some of the submissions by scrolling to the bottom of this page (but there are no links to the Lip-synching videos, which I’m terribly interested in seeing).

The video with the most votes (over 3000), over 11,000 pageviews, and 40 comments, is an original drama titled “Memory 记忆” It’s a blockbuster in DV format at over 16 minutes, and explores nostalgia, regret, and lost love.  Lots of shots of a girlfriend hitting her boyfriend playfully, ice-skating, and I won’t spoil it, but there’s a red feather that floats down from above as well. If you’re a Chinese TV drama fan, you’ll enjoy it!