Shanghai’s One CIty Nine Towns program and foreign-themed New Towns are strange and wonderful things. All are collaborative efforts between Chinese and international design teams.

Shanghai urban planners are trying to preserve the center of the city by not building any more new highways, and by setting up 9 satellite cities, or “New Towns” far out in the Shanghai suburbs.  But they need to attract people out of the city, into the outskirts–a tough job, unless you can create an atmosphere and lifestyle that one can’t find downtown.

Thus the nine theme-cities, seven based on the architecture of the UK, Italy, Germany, Spain, Sweden, Holland and Canada. The remaining two cities will be “Chinese,” and one of those will a sustainable, eco-friendly city on the huge Chongming Island.  You’ll find a short slide show of many of the towns as part of a recent BusinessWeek article on Shanghai. Fengjing is to be built in Canadian/North American style. Anting, with a race track, is the German town.  The Italian area, Pujiang, is to be the largest of the nine cities with a planned 15 sq km and 80,000 residents.

British-themed Thamestown covers 1 square kilometer in Songjiang District, about 1 hour from downtown Shanghai.  It has a lake, a river, a golf course, a Gothic church, a town square, and villas with names like WindsorIsland.  Here is the Thamestown official website in English, with news about the latest commercials and movies that were shot there, among other events (boat racing). Thamestown officially opened October 20, 2006; here you can see the opening ceremony festitivities–Chinese dance performance against the backdrop of First Vision Creativity Square.

Thamestown photo gallery. I especially love the shots that took advantage of an unusual snow in Shanghai: 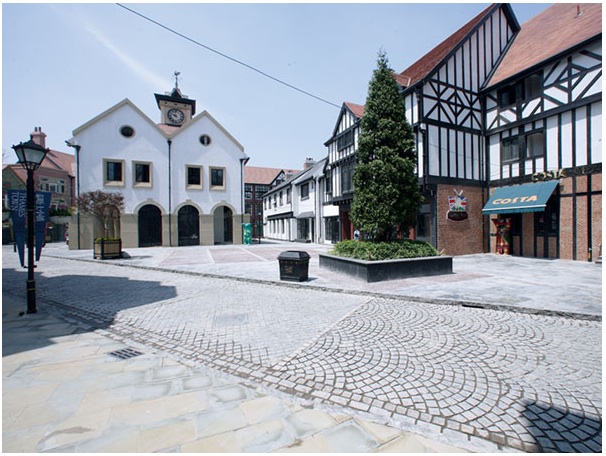 Luodian is the Swedish town. In a great post on Luodian and its original source, the Swedish town of Sigtuna, graduate student Ada Fredelius points out an irony: you can find more ancient authenticity, and even similarity to the original Swedish buildings, in Luodian’s old town, constructed in the early Min Dynasty.  Luodian’s old town on top, Sweden’s Sigtuna on the bottom, below: 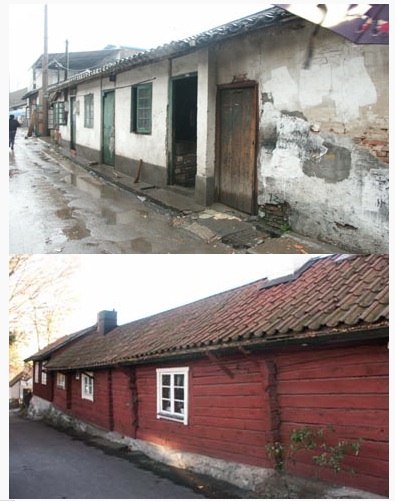 If you are in Shanghai, go on a FAR tour of the New Towns!