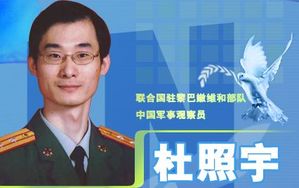 “The people’s heroes will never fade”

Chinese UN peacekeeper Lieutenant Colonel Du Zhaoyu was killed in Lebanon by an Israeli rocket on July 25, along with three other UN peacekeepers. China was already not supportive (to say the least) of Israel’s bombing of Lebanon and Lebanese civilians, and this death only adds fire to an anti-Israel stance.

An online memorial has been set up for Du, with special sections on his military career, his lifestory, major events in his life, memories from family and friends, and media coverage.  Visitors can also leave notes, with or without virtual flowers (at August 7 at 10 in the morning about 3000 flowers had already been sent), as long as they post an email address and name.  I posted one in English and it didn’t appear. We can get a sense from the posts of what kinds of messages are deemed acceptable by the military and Party organizations that host the site.

The overwhelming feeling being expressed is one of pride and sadness.  Most posts are emotional, often sweet, messages about how proud
the writer is that Du was representing China as a peacekeeper for the United
Nations in a wartorn zone:

Life is short.  Your life was lived well! Go in peace.

You are the pride of the people.  I hope you are continuing to protect world peace in another world.

Keep in mind, it’s easy to find extreme points of view represented online in any language. But there are a number of other notes that reflect some Chinese people’s anger at China’s inability to push through its own agenda in global settings. For instance, the first writer below sees Du as a martyr in China’s rise to significant global authority in the future:

A martyr’s blood will not be spilled in vain!