Just spent time in Shenzhen with my old friend Maryann O’Donnell.  If you are interested in the development of Shenzhen Special Economic Zone (SEZ) in particular, or more broadly in how to read historical, political, economic and social movements in a rapidly changing urban landscape, you will want to be reading her blog, Shenzhen Fieldnotes. You can learn more about her other projects (performances, translations, and more) at her GooglePage, and see her photos here.

O’Donnell is a Ph.D. cultural anthropologist who has been researching and living in Shenzhen for 12 years.  She makes forays into the changing landscape and photographs traces of the past and the future, as well as writes brilliant essays on the history and people of the area.

kaiping is famous for its towers, known as 碉楼, which were fortified
structures designed to protect families from local bandits. according
to anthropologist zhang guoxiong (张国雄)…from the mid nineteenth century on, men from kaiping began immigrating
to the united states and canada. significantly, because exclusion acts
prevented them from bringing their families with them, they sent
remittances home, often with the specific intent to build a safe tower,
where their families could live. it is estimated that from the
mid-nineteenth century over 3,000 towers were built, with intensive
construction happening from 1912 until 1937, when nearly half the
towers were built (1,490). 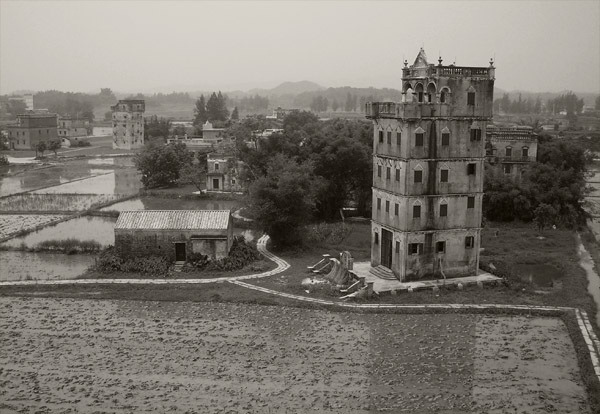 …today, kaiping’s fortified homes seem disconcerting monuments. to
departure. to social unrest. to history’s ironies. to ostensive luxury.
the towers, the tiled floors, the defensive infrastructure, including
weapons, the intricate wood carvings, the marble tables, the obvious
wealth boarded up and hidden behind concrete walls and rusting metal
shutters distressed me; a fortress can’t protect a dream.

One comment on “history, future, cultural archaeology of Shenzhen in a blog”