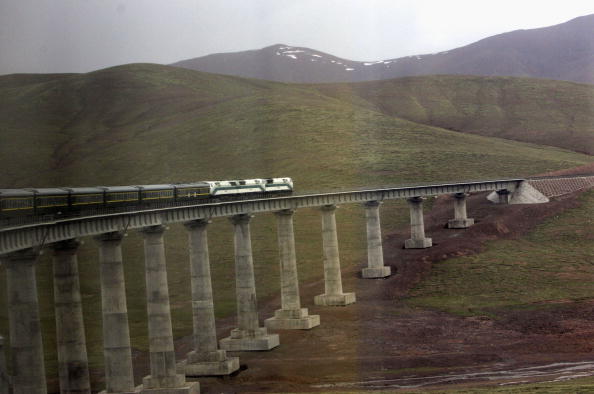 The last stretch of the Qinghai-Tibet railway between Golmud and Lhasa has now been completed. The first train left from Goldmud, Qinghai on Saturday the 1st of July after president Hu Jintao cut the ceremonial ribbon. The day of the opening was the same as the 85th anniversary of the Communist Party of China.

President Hu Jintao called the railway a “miracle” of railway
engineering when he officially opened the new line, the China Daily
reported on Monday. But the railway has drawn criticism from advocates
of Tibetan autonomy who say the trains will bring an influx of tourists
and long-term migrants who threaten Tibet’s cultural integrity. Link to Reuters

With 1,142 kilometers section of the railway between Golmud and Lhasa
running along Kunlun Mountain and Tanggula Mountain, 960 kilometers of
the railway will be above 4,000 meters, with the highest point at 5,072
meters, at least 200 meters higher than the Peruvian railway in the
Andes, which was formerly the world’s most elevated track. Link to News.xinhuanet.com

Check out the official Chinese website which provides a map with links in Chinese to each station, photos of the opening day ceremony in Golmud, and highlights on the armed police who are protecting the first bridge of the railway, which crosses the Himalyan origin of the Yangtze River. 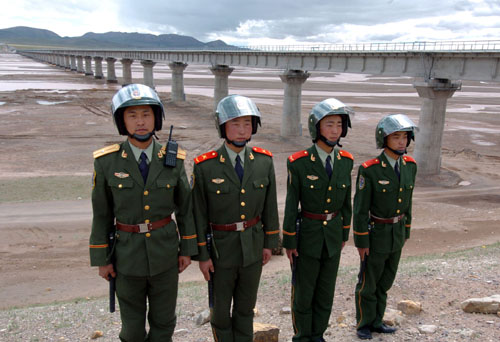 Reuters describes experiences from the journey:

“This railway is really comfortable. You can see beautiful scenery,
white clouds, herds of yaks and lots of wild animals,” gushed Tibetan
Mima Cering, attending the Police Academy in Beijing.As the train climbed, many passengers attached the tubes to their
nostrils and announcements warned passengers to avoid sudden movements
that could trigger sickness, even in the pressurized cabins. About a
third of those traveling in the cheaper cabins, mostly Tibetan
students, appeared to be feeling ill.

“Now we’ve reached the top, I feel sick and nauseous and have
headaches,” said Wu Jia, 32, a Chinese tourist. Older passengers,
looking uncomfortable, were lying down, children were crying and some
were being sick in the bathrooms.
Link

For more first hand reports in English, go to cnews.canoe.ca or Chinatoday.com