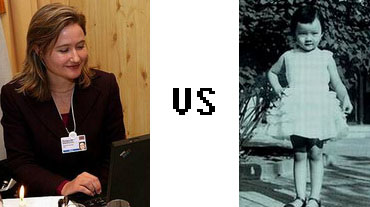 Rebecca MacKinnon and Hong Huang (洪晃) are gently sniping at each other on their blogs.

Both are writing about their attendence at the Chinese Internet part of the Fortune Brainstorm Conference, and the really juicy bits come out in their reflective blog posts. First, Hong Huang writes (and I’m taking the translation from Rebecca’s blog):

“The third speaker was my neighbor and friend from ten-plus years ago, Rebecca McKennin [sic]. Her Chinese is very good. When I was single she had a Chinese boyfriend. Every night I heard them having fun and it pissed me off. Later, Rebecca went to CNN and became a reporter, went on TV. But now she has left the high-profile, high earning job, and is planning to go to Hong Kong University to become a teacher, teaching multimedia. I admire this, that she is a very idealistic person. But idealistic foreigners never understand China as well as the foreigners who have selfish motives. And most of the people who have been journalists in China, especially for major media organizations, are all idealists. This leads to a bias in the foreign media towards China, and Rebecca is no exception. I am always loathe to talk about issues related to “internet purification” [a Chinese euphemism for censorship].  If this policy is necessary, one shouldn’t use such silly terms to implement it. One reason is that the foreign media misunderstands and they are given an excuse to make a mountain out of a molehill, which is really too bad. Second is that this kind of broad, theoretical, and impressionistic thing [policy] is very hard to implement. It would be good if there were an open, legally-grounded approach, then everybody would be clear about what’s going on and what’s against the law, and that’s that, and then it wont be so exasperating. Rebecca spoke for a long time, and I think she spoke almost entirely about “purification”, but because I am timid, and I treasure my blog, I won’t repeat it. But I still want to bring up this “purification” and this way I don’t need to cover it up. Just writing this paragraph of darn words has taken me two hours to write – just this paragraph!”

Rebecca responds on her blog:

“Hung Huang accuses me of an excess of idealism which causes me to be “biased” about China. Obviously my views of China are colored by my own personal experiences. Hers are colored by her life of relative privilege, and are somewhat different than that, say, of these peasants evicted from their land , or this woman whose brother has been detained without charge for six months.  Maybe I do talk much about these people, and the fact that their perspectives are often censored, and fail to talk enough about the many things happening in China that are worthy of praise and admiration. But if I do, I hope I am doing my small bit to counter-balance the fact that Huang and most of her countrymen are largely silent. Granted, it may be futile and dangerous for them to speak up, and perhaps I would be silent if I were them. But the consequences for me to speak are not so grave, and thus I feel that I have a responsibility to do so. If the price is a bit of sneering by Chinese bloggers about my naivete, spiced up with irrelevant comments about my personal life, I can handle that.”

P.S. Fortune claims Hong Huang has been “dubbed the Oprah of China.”

5 comments on “A blog dialogue on 老外 idealism”