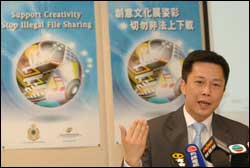 It looks like Hong Kong is taking a different approach to filesharing than the rest of the mainland.

A 16 year old Hong Kong student was arrested yesterday by the Hong Kong Customs Anti-Internet Piracy Team for hosting and sharing 600 pirated songs and about 20 movies.  The maximum penalty is 4 years in prison. This, six months after what the Standard calls “the world’s first criminal
conviction of a movie uploader,” when a Hong Kong man went to prison for 3 months for using BitTorrent.  Officials were tipped off by a complaint from the International
Federation of the Phonographic Industry, which represents the worldwide
recording industry.

The Standard reports he used “a high-speed data line and special software to convert his computer into a server.” Xinhua says this was done “by means of a
“Dynamic IP Re-direction Service” provided by a U.S. website.” The Standard goes on to report:

The Web site, which Tam said had been online for
about three months, asked other users to upload music onto the server
so that the Web master could organize the files and make them available
for download.

After
discovering the Web site, investigators managed to successfully upload
and download copyrighted the material, mainly songs by local Cantopop
artists such as Justin, Janice Vidal and Eason Chan. They also found a
few local and Hollywood movies, including Brokeback Mountain.

According to the Shanghai Daily,
Hong Kong’s music and movie industries – among Asia’s most vibrant – have also stepped up their fight against pirates.
Companies in both industries have tracked down Internet addresses
where illegal file sharing is suspected of taking place and sought
court orders demanding Internet companies provide personal details
about the alleged offenders.

The Hong Kong record industry has reached legal settlements with at
least 16 people who allegedly uploaded music for illegal sharing.