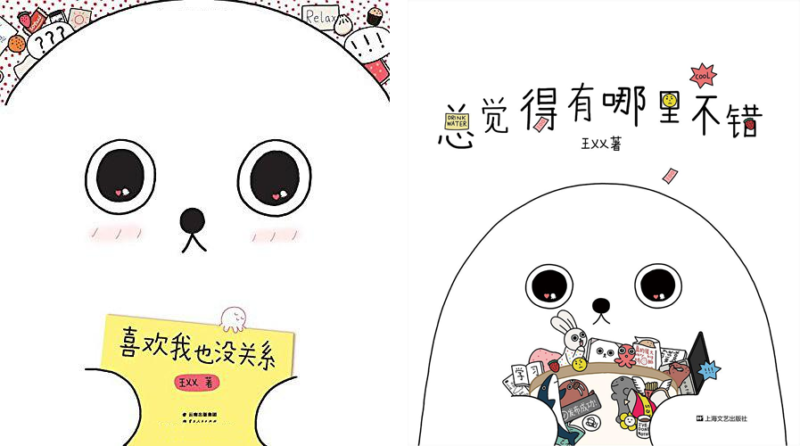 Upon first glance, Seal (海豹) looks like just another cute character dreamed up by the internet, lolling about on her futon, joyfully procrastinating with her friends. Seal embodies these positive qualities in her print debut, No Big Deal If You Like Me (喜欢我也没关系), and in the cult favorite Tumblr. But if you dig deeper into the larger universe of Seal comics – through the numerous webcomics on Weibo and WeChat, and through her second book Think I’ve Still Got It (总觉得有哪里不错) – a new facet of her personality emerges: Seal has existential dread.

This underlying sense of melancholic dread accompanied by her haphazard sense of optimism is what makes Seal, in publisher/writer Orion Martin’s words, “a quintessential millennial.” On one hand, Seal is scared of not being enough – not cute enough, not earning enough,  not successful enough in the eyes of family… On the other hand, Seal struggles and strives to be more – to earn more, to be happier, to be kinder to others… It’s when these two Seal qualities (fear and striving) collide that the comics are at their best.

The situations where these collisions occur may be mundane – Seal is based on Wang XX’s seemingly cushy life as a work-from-home freelancer – but its everyday-ness is what makes Seal so relatable. As American millennials know, the comforts of a white collar life in a post-recession world are more illusory than real, and the struggle to survive and thrive are as real as they have ever been. That Seal creator Wang XX is able to turn these mundane situations into moments of humor and catharsis speaks to the strength of her storytelling and to the enduring power of Seal.

The two print collections of Seal comics mentioned above, No Big Deal If You Like Me and Think I’ve Still Got It, are explorations into two different facets of the Seal universe. The former emphasizes her adorability and frivolity through a mix of short comics and narrated illustrations. The latter veers deeper into Seal’s psyche, with greater melancholy and moments of weakness, through a series of longer stories. Together, the two books make for a great introduction to Seal, whose life story continues to play out on her Weibo, WeChat, Instagram and Tumblr accounts.