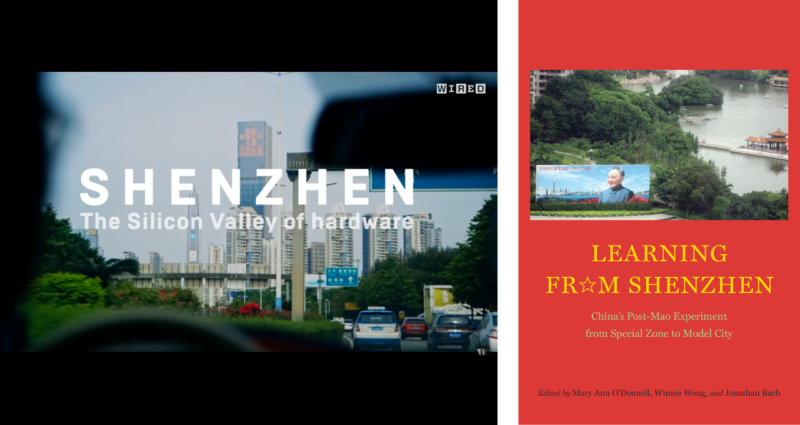 Shenzhen: The Silicon Valley of hardware
By WIRED Video, 68 minutes, $0.00

There’s a buzz about Shenzhen. The city and Special Economic Zone has long been on the radar of urban planners and economists, but in the past few years, an unlikely new group of admirers has appeared: knowledge workers and entrepreneurs from the Western tech startup world. Long known as a hub for copycat electronics, Shenzhen has become the hottest place to start a hardware company in 2017. So much hype has mounted that tech pundits and journalists have taken to calling Shenzhen, “the Silicon Valley of hardware.”

Wired’s recent documentary, bluntly titled Shenzhen: The Silicon Valley of hardware, explores why Shenzhen is the latest hotspot for hardware startups. An interview-style documentary, most of its 67 minutes revolve around a handful of Shenzhen-based experts and entrepreneurs. Through them, we are privy to the open secret that Shenzhen is not only a hotbed of hardware innovation but also the best and fastest place to prototype and manufacture hardware. That Shenzhen was developed seemingly-overnight adds to its allure and starry future.

The accidental main character of the documentary is Andrew “Bunnie” Huang, whose charisma and knowledge shine as he narrates what feels like a good half of the film. Segments featuring Huang include him taking us on one of his famous tours of the Huaqiangbei electronics market, as well as his take on how overreaching corporate patents are stifling hardware innovation in the US while Shenzhen speeds ahead due to its culture of open-source collaboration. In fact, a large chunk of the documentary is spent advocating for more open source hardware. As part of this effort, shanzhai (山寨), a Chinese term for pirated goods that became associated with Shenzhen’s notorious copycat culture, is reinterpreted as a force of openness and free-market experimentation.

Shenzhen: The Silicon Valley of hardware paints an exciting picture of a bustling city full of entrepreneurs, gadgets and startups. Unfortunately, as a documentary, it fails to move beyond its vantage point of a sojourning admirer. Not only is there an adoring montage about former Chinese leader Deng Xiaoping, the film lacks any real struggle or tension  for both its namesake city and for its character-participants.*  Yet perhaps that is precisely its intent. Silicon Valley itself is an ambiguous geographical area in Northern California that is not without its own problems. When its moniker is invoked, a dreamy image of wealth, entrepreneurship and technology appears, and the caricature is just abstract enough that the problems fade into the background.

* Its brief mention of problematic urban development ten minutes from its ending is too short and abruptly painted over with a happy ending to count.

In the wider world of nation states and economic development, Shenzhen stands as a different sort of exemplar – that of an eminently-successful Special Economic Zone.  While its rapid growth from small town to global metropolis is remarkable in its own right, what sets Shenzhen apart was the role it played as a beachhead and “model city” for economic liberalization in post-Mao China. It’s done well enough for itself, and for the country, that the Chinese government now celebrates Shenzhen as a miracle of state planning, as proof of their own acuity. But the authors of Learning From Shenzhen beg to differ. Instead, they argue that Shenzhen’s rise came at a critical, once-in-a-lifetime juncture and grew out of a complex dialogue between top-down central planners, bottom-up local reformers and Shenzhen’s actual residents – its indigenous villagers, migrant workers and entrepreneurs.

Learning from Shenzhen takes a qualitative approach to explaining Shenzhen’s development, mostly through a socio-historical lens. The book is split into three sections, each representing a different era in the city’s post-Mao development and expansion (from 1979 to the present day). Luckily for us, O’Donnell, Wong, Bach et al. pull no punches when it comes to Shenzhen’s rocky history. One memorable example is O’Donnell’s chapter on the early reformers in 1980s Shenzhen, which is at turns inspiring and heartbreaking. In it, she recounts how the “three special zone heroes” managed to exploit regulatory loopholes for the good of the city and its people during its first decade as a Special Economic Zone, and how the same reformers were then eventually sidelined in the political reshuffle that followed the 1989 crackdown.

One of the central themes of the book is the notion of borders and the “arbitraged difference” along its edges. While the dozen authors in Learning from Shenzhen tackle widely disparate topics (from the mental health of migrant sex workers to the urban development of an international airport), the idea of borders, both imaginary and real, static and expanding, is ever-present. Shenzhen, as it turns out, is constantly negotiating borders within and without: expanding its geographic border within China; breaking down its formerly colonial divide with Hong Kong; re-distributing rights to its bounded migrant workers; and dissolving the barriers between the city and its urban villages.

Like any good work of social history, Learning from Shenzhen uses a variety of disciplines and subjects to explain the city’s sudden growth. On top of this, O’Donnell, Wong and Bach manage to maintain a consistent voice and focus throughout the collection, despite the varying approaches of its twelve authors. As a result, it is an easy read: the messages are consistent, the language is clear, and each article is broken up into conveniently-subtitled sections.

Shenzhen: The Silicon Valley of hardware explains why Western knowledge workers see Shenzhen as a city of the future, and how they project their “Silicon Valley” fantasies onto the city, for better or worse. The film also offers a visually-stimulating glimpse into the city of Shenzhen – the urban environment, its startups, and local manufacturers – which is invaluable for anyone who hasn’t visited or seen much of the city themselves. However, for those of us who have seen or lived in Shenzhen, we may want to turn elsewhere.

Learning from Shenzhen tells a grittier truth about Shenzhen by examining the special circumstances that led it to where it is today. It delves fearlessly into the history of the Shenzhen Special Economic Zone, its internal frictions within itself and with the larger country, and its ever-evolving borders. If you want to understand the “Shenzhen miracle” or how “Shenzhen speed” came to be, Learning From Shenzhen is an incredible resource – for it presents the city as it is, warts and all, which makes it all that much more interesting for the rest of us.