Editor’s note: Below is a selection of our favorite Instagram posts that  Christina published during her 2016 trip to Beijing, Chengdu & Shanghai to research technology, youth culture and trends. 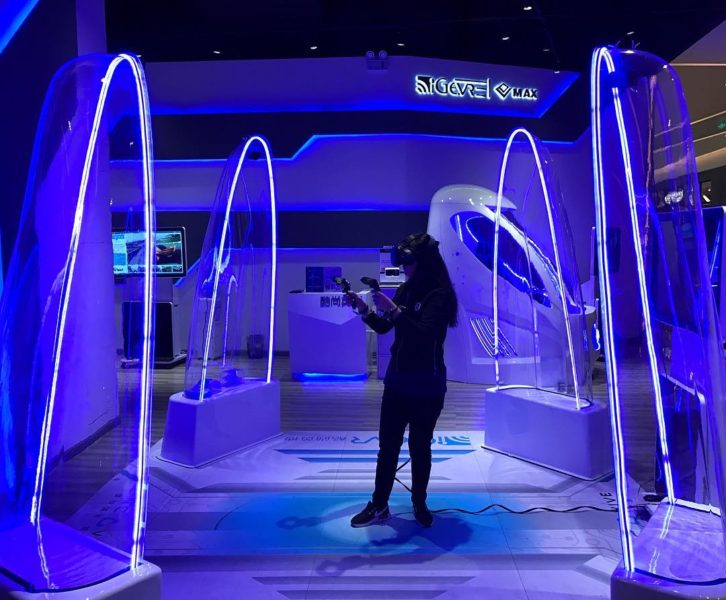 There are VR kiosks in almost every mid-high end mall I’ve been into in Beijing and Shanghai, as well as in other more DIY spaces. This is the most impressive specimen I’ve seen yet, with Vive sensors hidden in the glowing shells surrounding the player. The ovoid pod in the back is a different experience. This one was running Vive + Steam, but due to overinvestment in VR there’s a LOT of different VR platforms being used that have little chance of actually developing robust content ecosystems. The kiosks are extremely expensive to rent, as well, so it will be interesting to see if they can last. 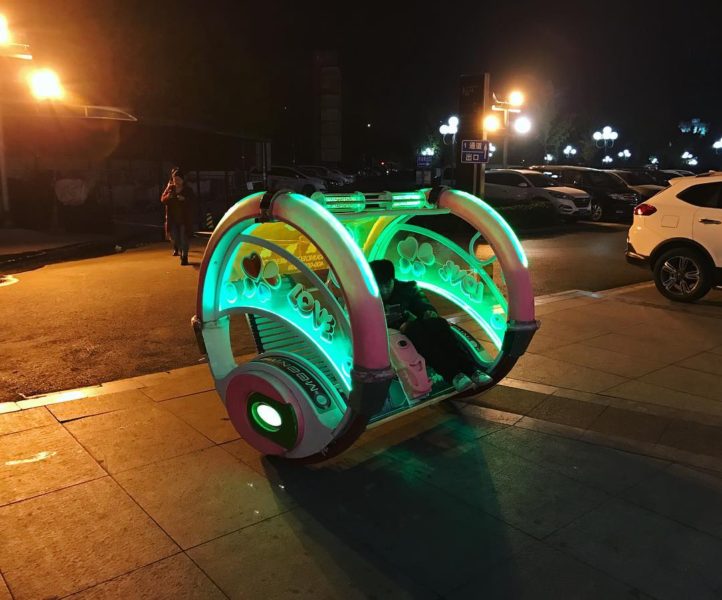 Casual Tron carriage, available for a novelty ride outside a mall in Beijing. Local manufacturing capacity + lax regulations about what you can let people sit in = proliferation of earnest and just-for-fun transportation options. 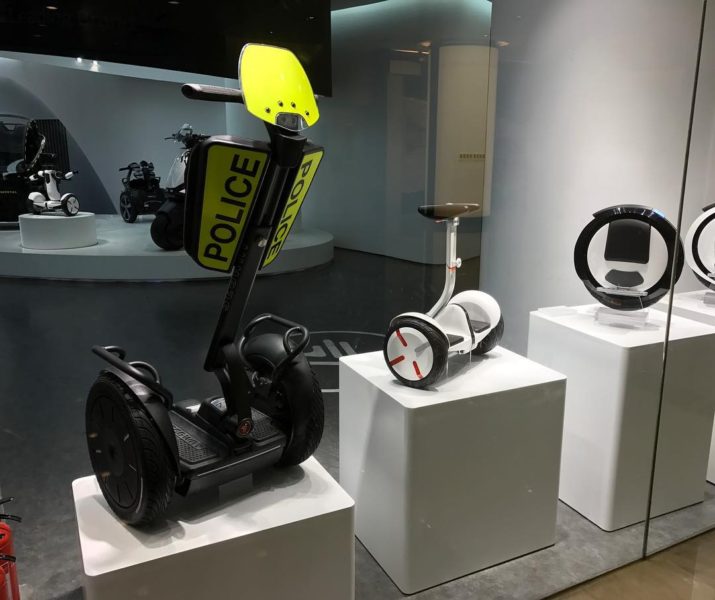 I walked by a SEGWAY FLAGSHIP STORE and they have this police segway on display next to one for a child. 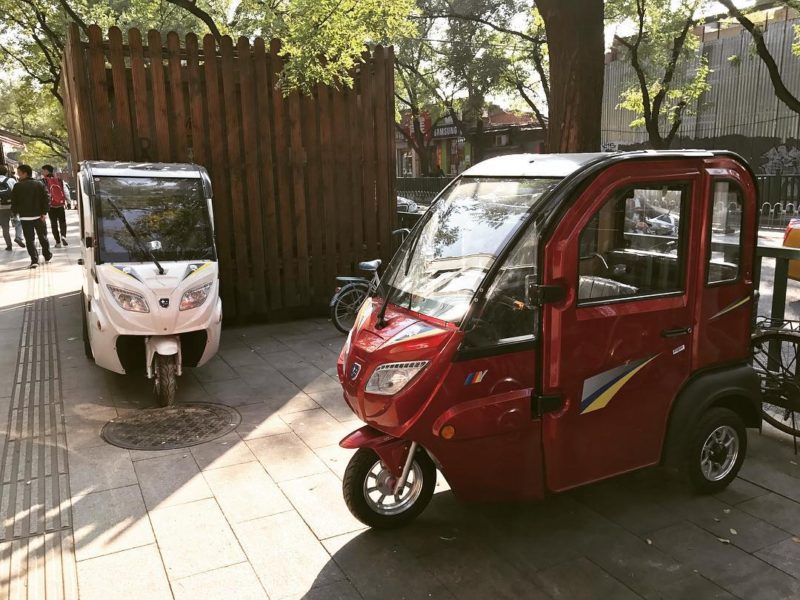 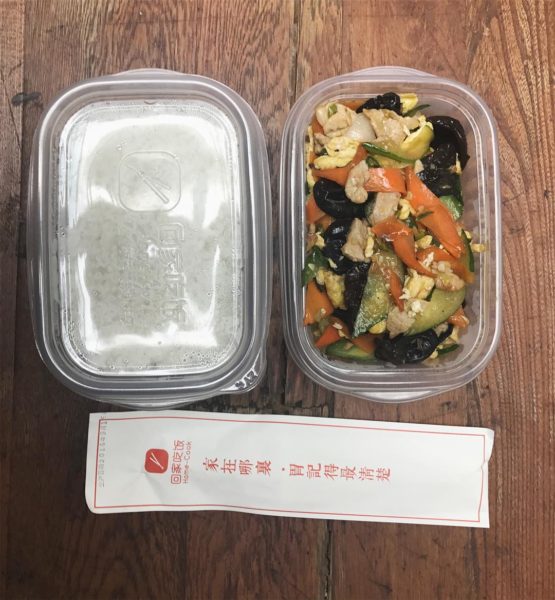 Wanted to try delivery today because it’s cold, the AQI is 26465437, and I have a ton of desk work today. This is from 回家吃饭(Go Home to Eat), a delivery service recommended to me by @pheona_chen that matches hungry people with licensed home chefs. In an era of food quality paranoia, homecooking is (maybe counterintuitively!) considered the healthier, safer option because it promises fewer additives and less greasy/salty food. 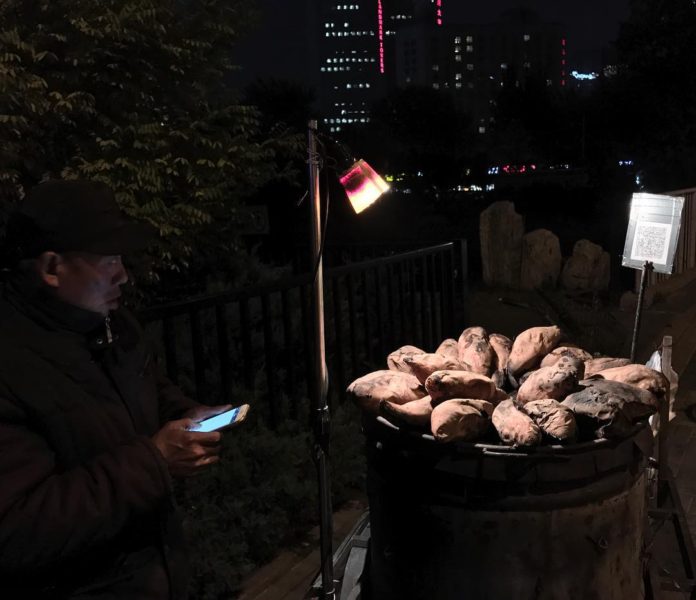 This traditional VISA charm is used to attract the blessing of many foreign visitors into your gift shop.

VISA and other foreign credit cards “外卡” are not widely accepted in most places in China, as the domestic competitor UnionPay has a lockdown on the Chinese market. 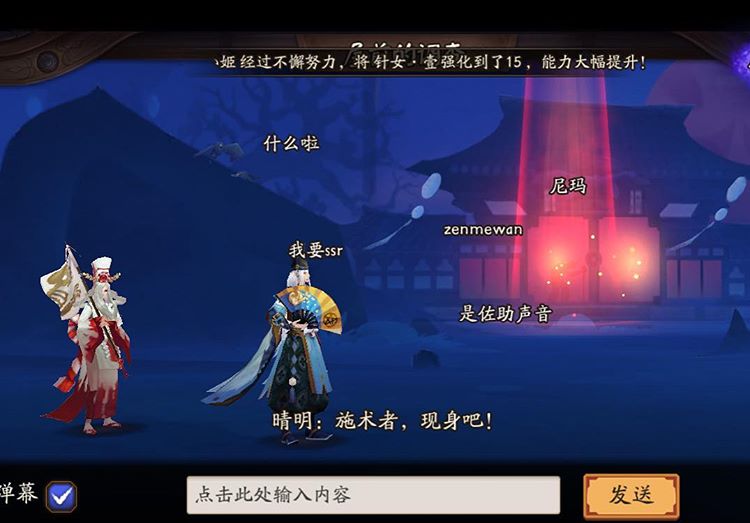 I started playing Netease’s hugely popular free to play mobile game 阴阳师 (Master of Yinyang) at @pheona_chen‘s recommendation. It’s an episodic creature collection RPG starring an amnesiac mystical investigator. The voice acting is all in Japanese to drive home the anime feel (and to curry Japanese fans, apparently successfully). My favorite thing about it is that you can turn on “bullet curtain” comments (popular on ACG sites like Bilibili) during the nonplayable cutscenes! 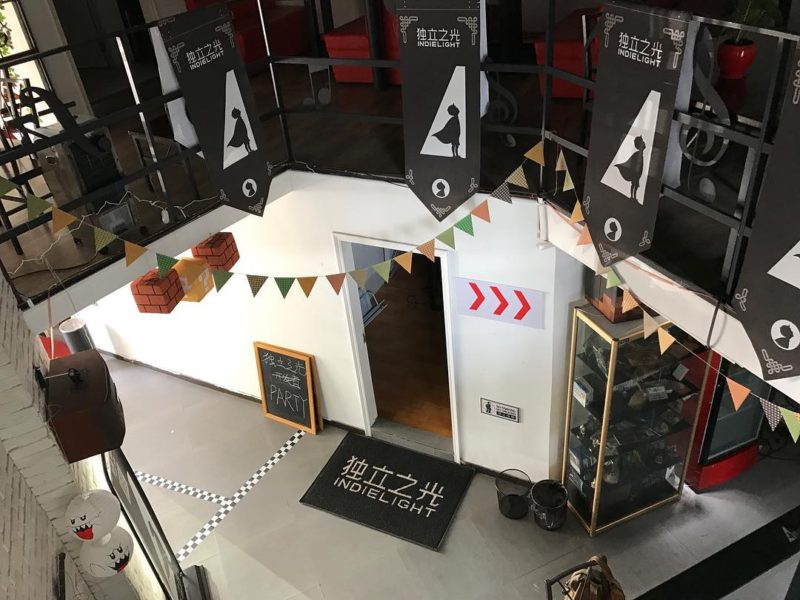 Last week I visited Indielight (独立之光), a cafe / gathering space created specifically to be a community hub for the indie game designers of Shanghai. It was opened 3 months ago by Snake, a developer himself who now runs a publishing/incubation outfit for local indies with ideas too big to execute on their own. Snake told me he hopes that the space will enable local indies to host playtest sessions & demos more easily as well as have a place to gather and talk, and is currently working out the business model for the space. 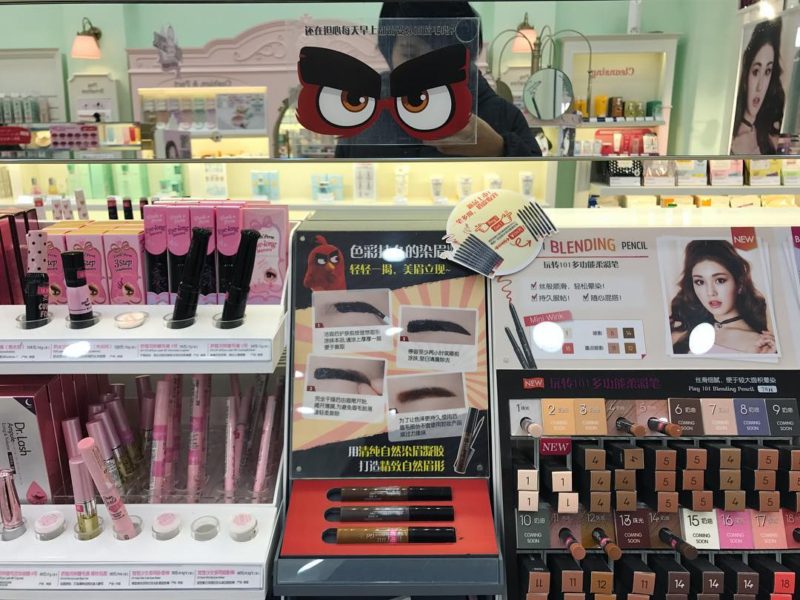 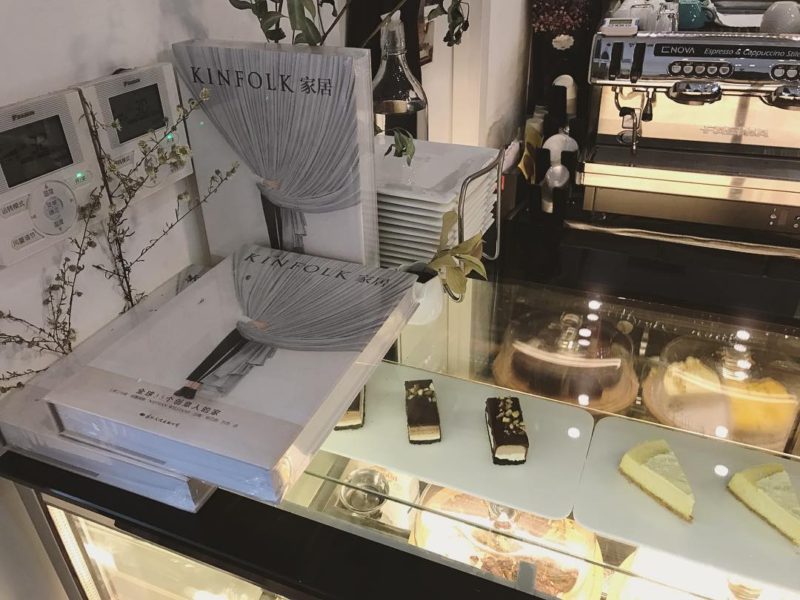 The 小清新 aesthetic, a kind of Chinese twee that’s about innocence, nature, and clean design, is popular among young people looking for quiet and elegance amidst noisy and rambunctious traditional Chinese past times. This cafe on 鼓楼东街 is one of many cloyingly tuned to this aesthetic: high ceilings, an abundance of plants, bookshelves and antiquated typewriters, expensive coffee, and–to seal the deal–a bunch of unopened copies of Kinfolk, the aspirational design Bible for this vibe. 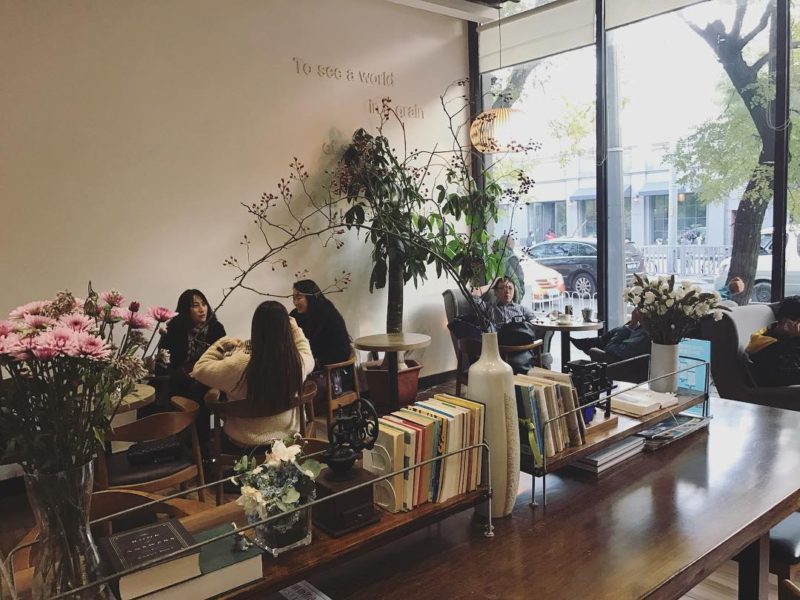 A better view of the cafe itself. Cafe culture in China is more social and less work-related than it is in the US. I don’t often see people working alone on their laptops or even having business meetings during the day (though that could be a factor of the area I’m staying in). Instead, they’re spaces for groups of friends to unwind and talk for hours, often after work (many cafes are open late rather than early). In that way, cafes are an alternative to bars, which are much more an expat thing to do casually. 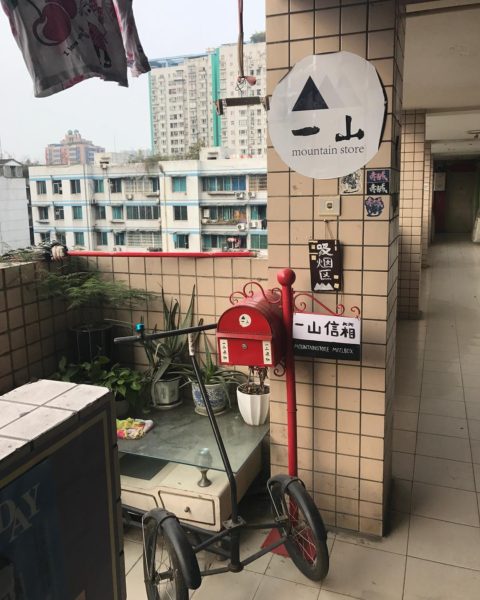 Mountain is a store that sells knick knacks from around the world, zines, vinyl and CDs, and even a few clothes. It’s on the 5th floor of the back side of an apartment complex–lack of zoning means that this store can coexist with the next door neighbor’s hanging laundry, seen in the upper left corner. 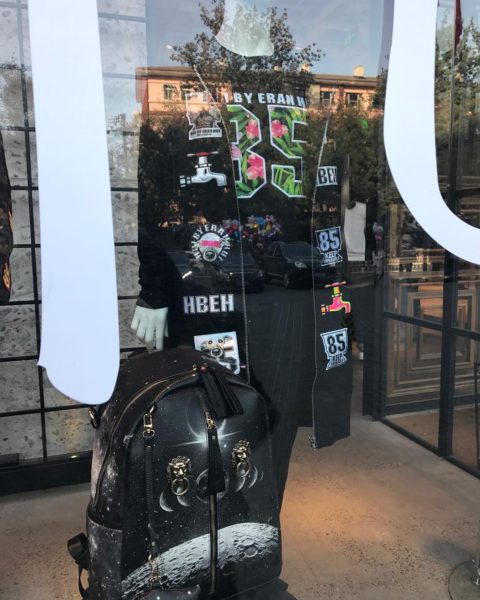 Streetwear has gotten even more mainstream in Beijing in the last year (comparable to athleisure in New York?) and local brands now look like US brands run through Deep Dream a few times. 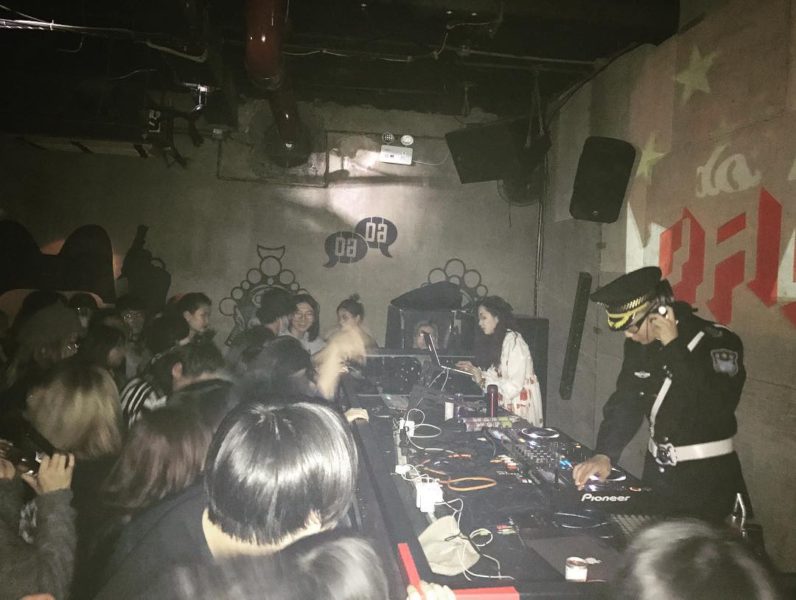 I’m at a Halloween party thrown by Do Hits, a Beijing-based DJ crew. It’s tuhao themed, so there’s a lot of opulent government-supported wealth being roasted. Jason Hou is at the decks dressed way too convincingly as a 保安 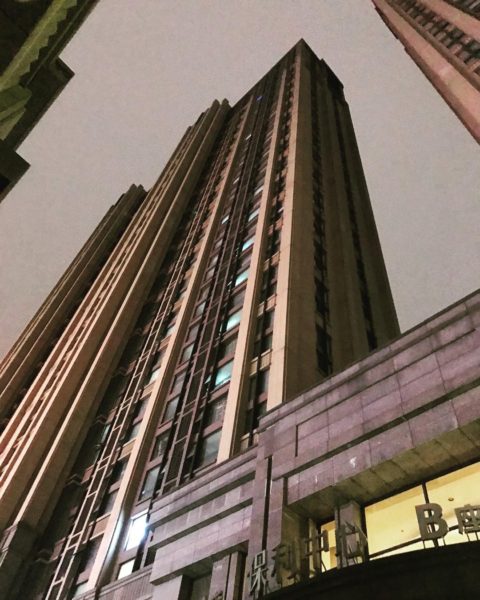 This is the Poly Center 保利中心, a high-rise office building in Chengdu that has turned into a hive of clubs and bars of all kinds. The first to move in (and get kicked out, and then move back in) was Here We Go 黑尾狗 all the way up on the 21st floor. Almost every room on that floor is a venue now, but HWG is still home to some of the more eclectic & experimental music in Chengdu. 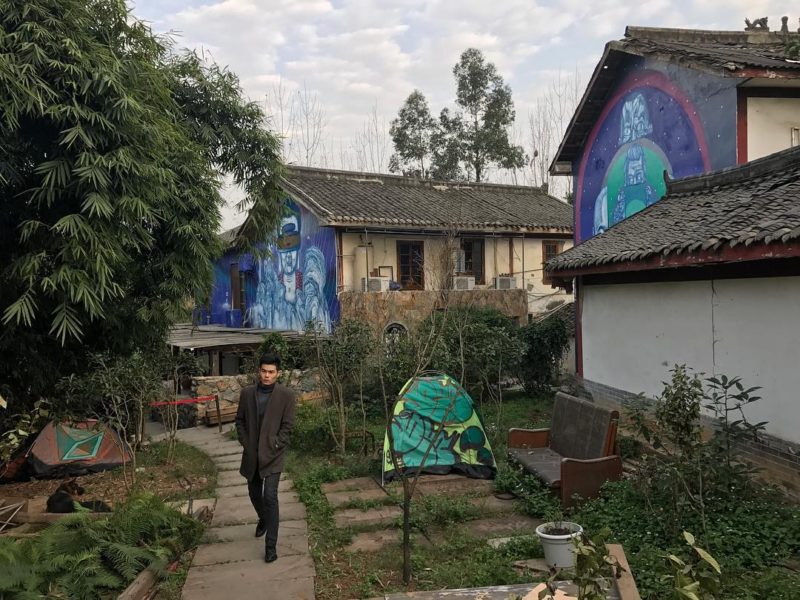 Morning House 早上好 is a cluster of buildings centered around a bar, about 30 minutes outside of town in one of the many rural villages being redeveloped as recreational spaces for urbanites who want fresh air and open spaces. Some of the other buildings at Morning House are used as dedicated practice spaces by local bands, including one of the bands performing at the festival.

Watching a Xiamen crowd mosh (or POGO, as it’s known here) to a Wuhan punk band’s cover (with a bagpipe!!) of Bob Marley’s Redemption Song was one of the more surreal moments on this trip. The band, SMZB (生命之饼 or “Flatbread of Life”) is on a 20th anniversary tour; they’re one of the older punk bands in China and are now scattered throughout Changsha, Wuhan, and Beijing. “We can only put out one record every two years because it’s hard to get together to practice!” explained the lead singer during the show. #cxinchina