This month, South Korean boy band sensation Big Bang arrives in Hong Kong as the newly-minted spokesperson for the local smartphone game, Tower of Saviors (pictured above… on the right). The city is abuzz with the news as Big Bang is extremely popular in Hong Kong and as advertisements are being plastered all over our subway system: 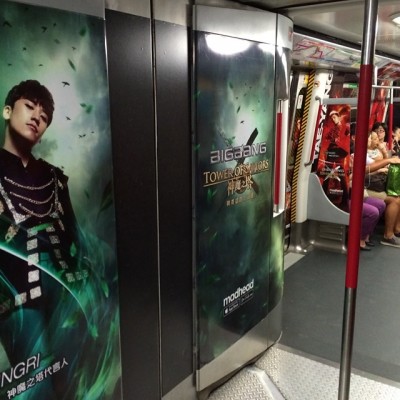 By all accounts, business is good for the makers of Tower of Saviors. Last October, Tech In Asia reported that the smartphone game had passed the 7 million download mark with an average revenue per paying user of US$40. And in March, Pocket Gamer reported that China game publisher Forgame paid over US$ 90 million for a 21% stake in their parent company.

But behind the commercial success is a mob of really, really angry netizens; they believe that Tower of Saviors is a shameless clone of Puzzle & Dragons. In case the image at the top of this article isn’t clear enough, EVCHK has three more examples of the similarities between Japan’s Puzzle & Dragons and Hong Kong’s Tower of Saviors.

If there’s anything I’ve learned from studying memes over the past few years, it’s the more inventive and humorous the meme, the more powerful it is. And the above song is not only funny, but immaculately produced. The first two lines of the song say:

Shanzhai, shanzhai, why are so many people buying
Be loud, copy quickly, then you can sell big

There are also image memes featuring the founder of the parent company:

And if that’s not enough, a parody app called Toilet of Plagiarists:

During the early rise of Tower of Saviors just over a year ago, Hong Kong legislative councilor Charles Mok was caught lauding its creators in Sky Post for their “work hard play hard” attitude and seizing the opportunity of Puzzle & Dragons’ not releasing a non-Japanese version. Two days later, Charles wrote a lengthy retraction in the Hong Kong Economic Journal, citing Facebook commenters who had pointed out the fallacies of his earlier article; including one who even went as far as to “unfriend” him in anger.

But within these two days, Charles had done his homework. First, there are over 20 Puzzle & Dragons clones, which makes the Tower of Saviors unremarkable in its mimicry. (Though it did disturb him that he publicly supported copycats.) Then, he found out that the Tower of Saviors creators were previously involved with Pencake, a Facebook app company that was banned from Facebook for its unscrupulous business practices.

Charles then quips: “如果不是初犯，就是誠信問題了.” (Translation: if it is not the first offense, then it’s a problem of honesty.)

And he audaciously ends the article with a Bruce Lee quote, “Mistakes are always forgivable, if one has the courage to admit them.” And adds, “I’ve admitted it, will Madhead [the Tower of Saviors parent company]?”

The reality of global apathy and legal challenges

Upright politicians and diehard netizens aside, most people actually don’t care. One of the most common questions asked about the topic is simply: which game is better? And Puzzle & Dragons lost points early by only being released in the US and Japan app stores, which insulted gamers and pushed them into the arms of its clones.

Unfortunately, cloning games is not an uncommon practice; casual gamers are pretty forgiving about it. One recent example was for the breakthrough puzzle game, Threes, which was created in the US; then promptly cloned as 1024 in Beijing; which was in turn cloned and open sourced as 2048 in Italy – much to the dismay of its original creators who had labored on it for over a year.

One of the major underlying problems is that there’s no clear or easy way to “copyright” a game (though it is possible to throw money at the problem in the form of flimsy software patents). As such, it’s usually technically not illegal to clone and sell a game.

Only time will tell whether Puzzle & Dragons and Towers of Saviors will succeed over the other, flop entirely as a fad or co-exist in the marketplace. It’s possible that the original’s design will remain superior and “crush” its clones. But it’s also possible that the clone’s significant marketing budget (Korean pop stars, etc.) will allow them to buy out entire markets.

What is already happening is that another Hong Kong-based game publisher, 6waves, is under fire for cloning smartphone games. It’s already lost its case once, and it’s slated to appear in court in San Francisco for another batch of products. Will Tower of Saviors follow a similar fate in the courts one day?

One comment on “Anti-shanzhai memes, copycat gamemakers and Korean popstars”