Excerpted from Bytes of China:

A few weeks ago, a conversation about the popularity of WeChat emerged on a tech mailing lists. Someone posted several reasons why they thought WeChat was more usable than Skype. They listed several technical reasons, such as ease of use, great mobile interface, and more efficient battery conservation. The person also proposed that WeChat depersonalized communication.

I wrote a response agreeing with the person but also adding that there are more than just technical reasons. My reply is below:

But there are several other reasons that are more deeply intertwined with the social norms of Chinese society – I won’t go into the social norms but I’ll just briefly list several reasons why Chinese youth love WeChat:

The first three points are the interesting reasons for why WeChat is so popular — they all revolve around meeting strangers.

One of the most important things to understand about Chinese apps is that the successful ones make serendipitous communication with strangers really easy.

In a society with very restrictive social norms around permissive interaction and self-expression, Chinese youth don’t have a lot of opportunity to meet new people outside of formal contexts or to express themselves.

So the quasi-anonymity of the internet provides a space for youth to explore emotions with strangers – emotions that they don’t feel that they can share offline with people they know like friends and family. There’s a bunch of social structural reasons for this that I won’t get into here. But the important thing I realized was the extent to which youth spend time online interacting with what we would call strangers – and really strangers is not an appropriate word because some of these relationships become very meaningful.

I don’t see user practices around WeChat as an example of communication becoming less personal.

The analogy I use is a bar – and that some apps are a lot of like third spaces, spaces outside of home (first space) and work (second space). The informality of a bar widens what is considered permissive behavior. When you walk into a bar, you can be anyone – you have no institutional or personal ties attached to you. We go to bars to meet strangers but also to be a stranger. We all need informal third spaces where we can chill in the company of unknown others.  And in the same way, we also need similar spaces online.

Some software environments are very formal (prescriptive behavior, primarily personal ties), but some software environments are more informal – and it is in these informal online spaces that people gravitate towards when they want to explore a self outside of prescriptive ties. In Chinese society where there are VERY limited options for self expression, online third spaces like WeChat are a place where self-exploration feels safe for Chinese youth.

[1] One Stand Tips is a popular message being passed around on Weixin. It’s written under the guise of a male giving other males tips on how to find one night stands with women on Weixin using the Drifting Bottle in the Sea (漂流瓶) feature. 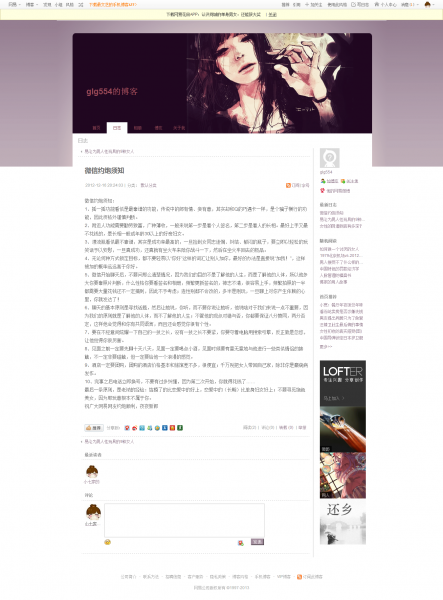 微信约炮须知：Tips for finding a One Night Stand on Weixin.

1. 摇一摇功能看似是最靠谱的功能，传说中的郎有情、妾有意，其实却和Q的巧遇卡一样，是个骗子横行的功能，因此须格外谨慎判断。
The “Shake it” function is the most useful function. It’s a mutual feeling. In fact, the “shake it” function is similar to the Qiao Yu card (巧遇卡, coincidence card) on QQ which that liars use, so you should judge carefully.

2. 附近人功能需要勤劳致富，广种薄收，一般来说第一步是看个人签名，第二步是看人的长相。最好上手又最不花钱的，是长相一般或年龄30以上的好奇妇女。
The function of “Nearby” needs hardworking to make ONS comes to true. In general, the first step is to look at the personal status and the second step is to look at the appearance. The ones who have ordinary appearance or who are curious women 30 years up are easy to hook ups.

The floating bottle (漂流瓶, Piao Liu Ping, which is one of the fuctions of Weixin) may appear to be unreliabe but in fact gives you the highest hook up success rate.  Once you pick a bottle from women who feel lost or blue, you should comfort her with jokes. As long as you succeeed, there are some who will take a train to see you.

4. 无论何种方式锁定目标，都不要轻易以“你好”这样的词汇让别人加你，最好的办法是直接说“加我！”，这样被加的概率远远高于你好。
No matter how you set your goal, never write “hello” to ask people to add you. The best way is to write “add me” directly. This gives you a higher chance to be added than a “hello.”

5. 微信开始聊天后，不要问那么清楚情况，因为我们的目的不是了解他的人生，而是了解他的人体，所以他多大你要靠照片判断，什么性格你要看签名和相册，频繁更新签名的，神志不清，很容易上手，频繁拍照的一半都需要大量花钱还不一定搞到，因此不予考虑；连性别都不会改的，多半是刚玩，一旦聊上对你产生依赖的心里，你就发达了！
When you begin to chat with a girl on Weixin, do not ask too much about her. This is because our goal is to know about her body instead of her life. So you need to tell how old she is through pictures, and get o know her personality through her personal status and photos in her folder. The ones who often change personal statuses are usually easy to hook up with. The ones who often take pictures can be expensive to court and you may fail. So we do not consider them. The ones who do not change  their gender are usually rookies. Once you hook up with her. make her feel like she relies on you. You earned it!

6. 聊天的基本原则是寻找话题，然后让她说，你听，而不要你说让她听，他说啥对于我们来说一点不重要，因为我们的原则就是了解他的人体，而不了解他的人生；不管他的观点对错与否，你都要保证八分赞同，两分否定，这样他会觉得和你有共同语言，而且还会感觉你很有个性。
The basic chatting principle is to find topics that will get her to talk, then you listen. It’s never the other way around.  It is not important what she says. This is because our principle is to know her body instead of her life. No matter if her view is right or wrong, you should agree 80% and disagree 20%. This way she will feel that you two have a common topic of interest and that you are special.

7. 要在不经意间炫耀一下自己的一技之长，没有一技之长不要紧，你要守着电脑用搜索引擎，反正就是忽悠，让他觉得你很厉害。
Show off your talents. It doens’t matter if you don’t have any. Have a computer with you and use the search engine, just brag. Try to make her feels that you are the greatest.

8. 见面之前一定要先聊十天八天，见面一定要喝点小酒，见面时候要有意无意地与他进行一些类似情侣的接触，不一定非要碰触，但一定要给他一个浪漫的感觉。
You need to chat with her for 8-10 days before you two meet. Drink some wine and interact the way lovers do. You do not have to touch her but you need to make it romantic.

9. 酒店一定要团购，团购的酒店价格基本和旅馆差不多，很便宜；千万别把女人带回自己家，除非你是癫痫病发作。
You need to reserve hotel through group buying. The prices will be similar to a motel which is also cheap. Never bring a woman home, unless you are crazy.

10. 完事之后电话立即换号，不要有过多纠缠，因为第二次开始，你就得花钱了……
Change your cellphone instantly after you finish. Do not have any more contact. Because seeing her a second time will cost you money.

最后一条原则，是老衲的经验：结婚了的比恋爱中的好上，恋爱中的（长期）比单身妇女好上；不要寻觅绝色美女，因为那玩意根本不属于你。
The last principle is based on my experience: the ones who are married are easier to succeed with than the ones who are not. The one who are in love (in long term relationship) are easier to hook up than singles. Do not look for beauties. Those ones do not belong to you.

祝广大网易网友约炮顺利，夜夜新郎！
I hope that my internet pals will success in hooking up and becoming a groom every night.