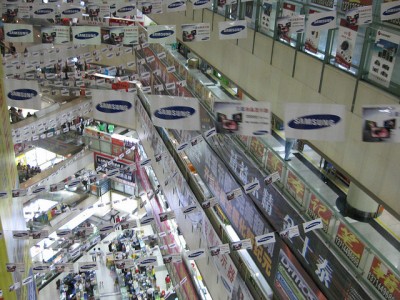 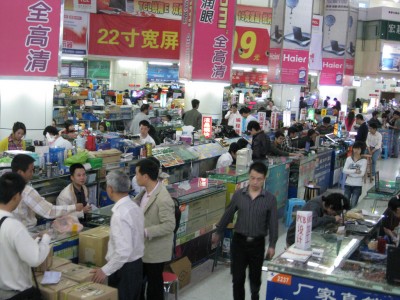 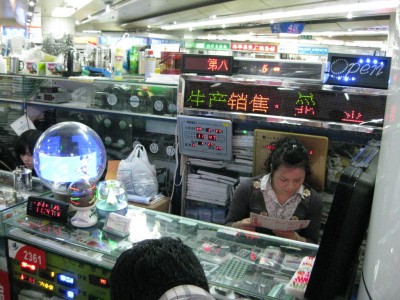 Photos by Windell H. Oksay, from an Evil Mad Scientist post in 2009. From the hours I spent there last year, it hasn’t changed since then. Note the heavy advertising expenditure from Samsung, who were out there back in 2009 already.

The electronics markets around Huaqiangbei Road (华强北路) in Shenzhen are huge; hardware components, tape reels, LEDs, cell phones and laptops manage to fill up not one but many tower malls. Unlike many other hotspots in China though, Huaqiangbei has reached a sort of mythical status amongst makers worldwide. Hardware hackers, engineers and enthusiasts’ eyes light up when they talk about Huaqiangbei (sometimes referred to simply as SEG, the name of one of the more prominent malls). As far as I can tell, it started when maker hero Bunnie Huang visited in 2007 and wrote about his experience in a blog post titled, Akihabara, Eat Your Heart Out:

Ten years ago, Akihabara was the place to be for the latest electronics and knick knacks and components. I’m convinced the new place to be is the SEG Electronics Market in Shenzhen…

Chips that I couldn’t dream of buying in the US, reels of rare ceramic capacitors that I only dream about at night. My senses tingle, my head spins. I can’t supress a smirk of anticipation as I walk around the next corner, to see shops stacked floor to ceiling with probably a hundred million resistors and capacitors.

Oh my god! Sony CCD and CMOS camera elements, I couldn’t buy those in the US if I pulled teeth out of the sales reps…

Since then, Bunnie has become a sort of unofficial ambassador of Huaqiangbei/Shenzhen to Western makers. For example, he’s responsible for this geek tour of Huaqiangbei in 2009 (where the above photos come from) and he just wrapped up leading an MIT Media Lab month in Shenzhen.

From my experience buying at Huaqiangbei, what’s surprising is that it is not outsider friendly at all. Even as a Mandarin speaker, I was grunted at, turned down for buying too little at once, and generally bewildered by the lack of wayfinding.

There is some basic organization though, as Windell from Evil Mad Scientist points out:

“Low-level” components like the aforementioned transistors and capacitors are found on the lower floors, while “high-level” devices like computers, storage media, speakers, and all of their friends are found on the upper stories.

To cope with the chaos, people develop strategies for getting what they need out of Huaqiangbei. For example, Silvia Lindtner documents her experiences shadowing Yair, a maker from Tel Aviv:

In a notebook that he carries with him he clips the vendors’ business cards and draws next to it an image of the component, the name, part number and price per piece or per purchase. Upon his next visit, he already knows where to look for a specific part rather than repeating the search all over. A simple and useful way of tackling the maze and over time develop a network of trusted vendors who also offer a good deal. 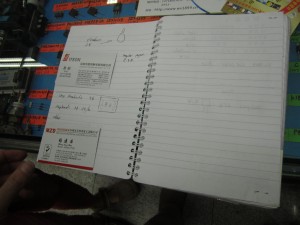 But Lindtner notes that if Yair really has trouble finding something, he goes to a trusted “Madame Cai,” who will get on the phone for her customers to get them what they need… for a markup:

Customers come to her with a list of parts containing at least the part number, but often also the amount you need and a photo or drawing of the component. 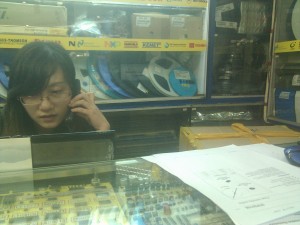 At her stall, Madame Cai sits behind a glass display that shows off samples of parts she might help you with, often in different sizes so customers can easily point and explain their need. When customers stop by, Madame Cai goes through their part list for a quick assessment of what is in her reach to acquire. Then she begins making a series of phone calls to vendors within her network to confirm what she can get that day or what has to wait a day or a week. Most of the time, parts are ready 20 minutes after a visit.

One thing that fascinates and frustrates me about Huaqiangbei is that there’s no such thing as a short SEG/Huaqiangbei trip. I have spent entire afternoons there willingly, wandering around until the stores shut down. But I’ve also lost afternoons there trying to find the right part or vendor, or simply because I had to jostle my way from the subway up to the fifth floor. So in some ways, it doesn’t live up to the hype about being the hardware fairyland of the world.

For more about Huaqiangbei:

(Special thanks to Star Simpson for giving me my first tour of Huaqiangbei.)