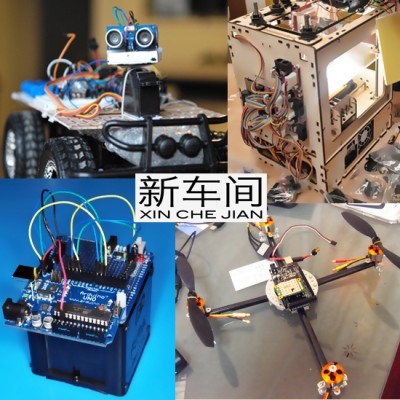 Finally we get some sense of history to hackerspaces outside of the West from Silvia Lintner and David Li in their latest co-authored article in Interactions, Created in China.

In September 2010, China’s first hackerspace opened its doors in Shanghai under the name XinCheJian (literal translation: new workshop, or new factory). Only a year after the founding of XinCheJian, the Shanghai government announced a call for proposals to build 100 “innovation houses” (chuangxin wu ) to be supported by government funding. Although the official document [4] described this initiative as part of a larger effort to build a citywide platform for supporting popular science work and innovation, national and international media interpreted this move as an endorsement of China’s fledgling maker culture by Chinese politicians.

They article is more than just a report on hackerspaces. They do several important things. First, they show that Chinese hacker spaces are incredibly politicized on a local level and on a national level. Silvia Lindtner has done a lot of research on the politics of Chinese hacker spaces for her dissertation that is a must-read for the juicy back stories that link hacker spaces to larger national efforts for innovation. In the article, they ask,

What motivated politicians in China to support the growth of a community that has come to be known for its commitments to a do-it-yourself (DIY) approach toward making technologies and to the free and open exchange of knowledge? How does maker culture manifest itself in China, where “making” in the DIY sense collides with China’s image as the world’s largest manufacturer?

Members of the growing scene are not only into making and remaking technologies, organizing workshops, and showcasing their work to others, but also are actively engaged with political debates. For example, the announcement by the Shanghai government to support the establishment of hackerspaces as innovation houses has been the subject of heated debate.

They also connect the hacker space culture to shanzai culture, which is a very important link that reveals the bottom up nature of these spaces.

This form of open source manufacturing has co-evolved with the formation of new production sites, including, for example, counterfeit/copycat design houses. Over the years, these copycat productions have adopted these open source processes and moved beyond simply copying popular brands such as Nokia or Apple. Today they often produce new, consumer-specific products, such as mobile phones with additional features tailored to particular customer segments or location-specific demands. Examples include dual-SIM-card mobile phones that support two operator networks on one device—such as the G5 phone, a made-in-Shenzhen brand for the Indian market—and phones with built-in compasses that are shipped to consumers in the Middle East, who may need to know the direction of Mecca during prayers [11,12]. Many of these innovations were later reappropriated by mainstream mobile manufacturers; for example, in 2010 Nokia launched two dual-SIM mobile phones.

Copycat productions from Shenzhen are often described with the term shanzhai (山寨). However, in the hackerspace community, shanzhai now speaks to a new form of innovation based on the principle of open source manufacturing and continuous remaking. The literal translation of shanzhai is “mountain village” or “mountain stronghold,” the home to bandits or Robin Hood–like figures who oppose and evade corrupted authority. China’s hackerspaces invoke this image of subculture in order to argue for an alternative take on the meaning of copying through the lens of remaking.

In their concluding comments, they make a case that hacker spaces are signs of Chinese people being creative. They are critical of statements that contribute to “cultural stereotypes and extend existing systems of power” that portray Chinese people to be uncreative. They cite  James Landay, a professor who helped lead Microsoft Research Asia’s HCI group in Beijing, in a quote where he says Chinese researchers are not as creative as US researchers.

He [James] argued that “the level of innovation and creativity in this cohort is much lower than in similar cohorts in the U.S. And in fact, the ones that are the best on the ‘creativity’ scale almost invariably are folks who received their Ph.D.s in the U.S./Europe or worked in the U.S./Europe.”

My research on Chinese youth lines up with James’s assessment. In my work, I show that the lack of trust between individuals and social trust with institutions is hindering creativity. The problem is that institutions can really promote or damper the expression of creativity, and in the case of China, its education system (combined with cultural elements and political control) has hindered, not promoted, creativity among Chinese youth. The students WHO DO make it to research labs like the one that James’s was overseeing in Beijing or in more elite positions like running companies aren’t necessarily the most creative ones, they are the most privileged ones and sometimes they are the most knowledgeable ones.

The reality is that Chinese people are not as creative as they could be, for now. There is nothing inherently uncreative about the Chinese. I mean who really thinks that about Chinese people after spending a day on the streets. Migrants and youth all over are doing mind-blowing stuff. China is dripping with creativity as your research confirms. But we aren’t’ seeing the mind-blowing stuff happening within formal spaces.

So where are the creatives in China? I don’t think the future crazy ass disruptive innovators are going to come through Tsinghua, this is not to say that there aren’t brilliant freaking people there doing cool stuff. But the crazy kind of thinking-out-of-the-box-crazy-ass-imaginative-attitude needed for disruptive innovation may be more attracted to space like XinCheJian. Researchers like James work in a very institutional formal place so his assessment makes sense for the kind of researchers who are coming through Microsof. But of course Silvia and David know where the most exciting energy in tech innovation lies – hackerspaces!

That’s why more research like Silvia’s on hacker spaces is super important because it highlights the possibilities for alternative spaces of creativity in China. Hackerspaces promote the exploration of the unknown – their cultures around sharing and teaching all create an informal environment to get people to learn new things. So more research please! Creativity is not dead in China, it’s just happening in informal spaces.

3 comments on “Where are all the creative Chinese people? hanging out in hacker spaces apparently”