These days, I spend a lot of time at Peking University, and I’ve noticed a few interesting things around campus. There are a ton of things you might expect to see at any big university: ads for part time jobs, for print shops, and for student groups and events.

A few, however, caught my eye. Today, here are three pictures and three explanations, beginning with the picture above.

For some reason, someone has written “China Online” in whiteout on a construction barrier near the university’s East Gate, just between the new subway exits. It could be this metal plank served some time outside www.china.org.cn’s offices (the site uses the phrase in its title). Or maybe some student came by and thought a rusty old metal barrier symbolized the experience of going online in China. More likely neither explanation is correct, but I like the picture nonetheless, and I suspect it may end up in a presentation or two. 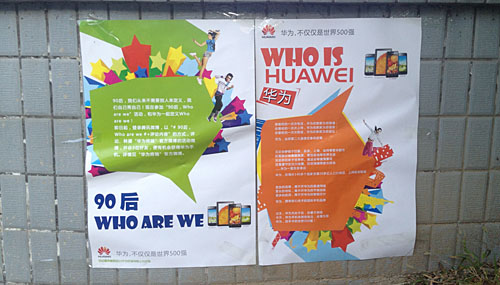 Next, Huawei posters are affixed to an outdoor wall in the southwest part of campus. The message specifically targets youth born after 1990, who at this point represent the vast majority of university students. In China these days, age cohorts are divided by decade rather than by era. To date myself, I’m in the after-80 crowd, one known in this country for being spoiled and individualistic.

This ad targets the after-90 contingent. (In U.S. marketing, both groups are generally considered part of the “millennials.”) Here’s a transcript and translation of the two posters. For the record, Huawei was founded in the ’80s, but its “Huawei Device” division was founded in the early ’90s.

As children of the 90s (“after-90”), we have never needed anyone to define us. We define ourselves! Participate in “After-90 Who are we” and define “Who are we” with Huawei.

Starting today, log on to Tencent Weibo and tweet with the hashtag “#After-90, Who are we#” to comment. For a chance to win a Huawei mobile phone, retweet the official Huawei Device account and @reply three friends.

Huawei. Not just a Fortune 500* company.

*They don’t use the title Fortune, but the “wordwide 500 strongest” designation refers to the Fortune list wherever I’ve seen it.

No matter if you’re shuttling between the bustling Paris, Tokyo, Shanghai, and Dubai
Or traveling on world landmarks like the Qinghai-Tibet Plateau or Mecca;
No matter if you’re attending sporting events like the World Cup or the Olympics
Or helping you’re working to relieve the disasters of the Wenchuan earthquake or the Indonesian tsunami
Huawei is always by your side.

Yesterday, Huawei was everywhere, but you never saw it.
Today, Huawei mobile phones are at your side, working for you.
Huawei, Fortune 500 in your hand!

What to make of all this? First, I honestly wonder whether any human other than myself has read the whole right poster. Nonetheless, the text reveals the brand recognition and pride Huawei projects within China. This poster was very close to a part of campus that has line of sight to the nearby high-rises of Zhongguancun, the city’s main technology business district. From one vantage near the School of International Studies, a tall building is topped with a Sina logo.

While Peking University does not specialize in technology as much as neighboring Tsinghua, students would recognize Huawei, which has become one of the ubiquitous faces of Chinese technology and computing. The Fortune 500 designation might be seen as a recognition of what they already know: that Huawei is a big deal. It is not as rare a distinction as it used to be, though: Fortune lists 73 Chinese companies in the global top 500, second only to the United States. Of course, Huawei now has its own identity in the United States, but for far less desirable reasons than its market share and products. 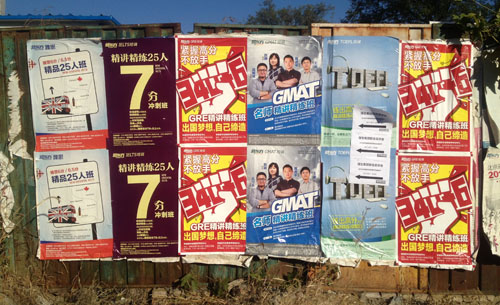 Finally, I noticed several advertisements for test prep to study abroad, but this panel blows the others away, with prep for IELTS (an English language test important in the U.K. and elsewhere), the GRE (interdisciplinary graduate school entrance exam run from the United States), GMAT (for business school), and TOEFL (an English test used by many U.S. programs). All these posters come from 新东方, or New Oriental.

This is no surprise, perhaps, but it is a reminder that those students (including many of my friends) who have made the leap to international study from China have yet another round of testing on top of the much-discussed stress of the gaokao in China. The GRE poster’s slogan is especially strong: “出国梦想，自己缔造” — roughly, “Found your own dream of going abroad.”

Bonus: It was a beautiful week as fall begins at Weiming Lake: 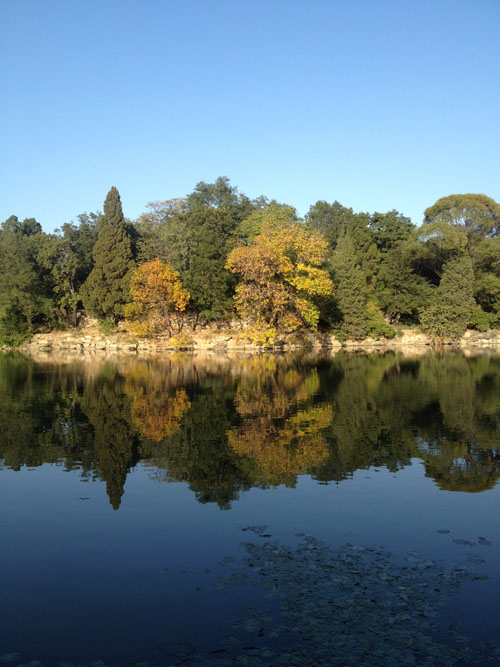 3 comments on “Huawei Ads and Test Prep: The Writing on the Wall at Peking University”