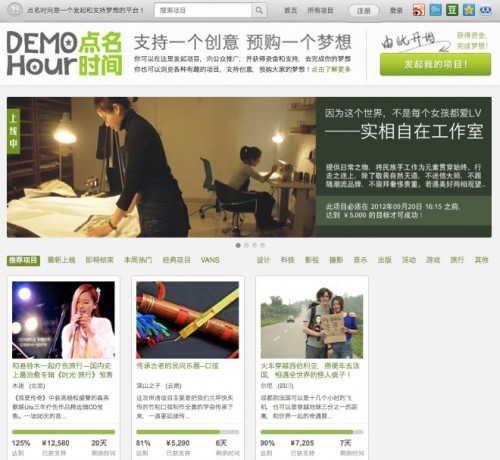 This is a collaborative post between Lyn Jeffery and Jason Li. Lyn begins by writing…

Crowdsourcing has been around for awhile (this 2006 Wired article nicely lays out the concept). Over the last three years, crowdsourcing has been applied to fundraising with stunning results on Kickstarter and Indiegogo (“Go fund yourself”), and the experiments continue: Loudsauce is a “crowdfunded media buying platform” that encourages the growth of new media buying collectives to support cause-driven campaigns.  So it’s not surprising that there would be a Chinese version of Kickstarter. Australia’s got Pozible; Brazil’s got Catarse. It makes sense that different kinds of communities would want their own crowdsourced funding sites because people have different stories about what they’re doing when they’re giving away money. You have to know your crowd to please it enough to support you financially. Those who succeed on these sites have to be experts at working their media and social network contexts (note: it’s hard work).

So what’s going on on DemoHour 点名时间, the Chinese crowdsourced fundraising site, and what kinds of stories are getting Chinese netizens to part with their RMB?  Let’s start with its tagline: Support a creative project, purchase a dream in advance (Awkward translation alert #1! The original is 支持一个创意，预购一个梦想, and I can’t get it to not sound like Chinglish, sorry).  This is all about creating “miracles” and fulfilling creative dreams.  Some other basics: according to a recent interview with founder He Feng in the China Daily Europe edition, “70 of the 150 programs placed on Demohour.com have succeeded in raising funds, and the rest are still taking in money.”

One of Demohour’s biggest fundraising successes to date combines a couple of crowdpleasing narratives: illness, celebrity, personal struggle and triumph, and singlehood. Piss Off, Mr. Tumor (滚蛋吧肿瘤君) is a comic strip created by beloved cartoonist Xiong Dun to tell the story of her diagnosis with non-Hodgkins lymphoma. This is donation-as-financial-support for a well-known artist. It’s not the way that Kickstarter has been used, but reminds me of the common U.S. practice where local artists put on a benefit to support someone in their community who is sick and has little or no health insurance. In this case, Xiong had already built a fanbase with her comics “A Bachelorette’s Diary”《熟女单身日记》 , Superwoman on a Diet 《减肥侠》, and “Maturing into Womanhood”《熟女养成日记》.

Just as in most Kickstarter successes, the mainstream media played a role in advertising the project. The cartoon started to be shared in August 2011 via Weibo and the Tianya forum and quickly got broadcast media attention. Then DemoHour reached out to invite Xiong Dun and her roommate to submit their project as a way to quickly raise money to pay for her hospital bills, and to market the DemoHour site to her large audience.

The project raised 340,000 yuan ($53,389, 42,275 euros).  There are 7 different levels of donation, some of them quite close together in price, ranging from 30 RMB (about US $4.70) for 6 bookmarks to 500 RMB (about US $78) for a signed, framed hand-drawn original cartoon, a limited edition Piss Off, Mr. Tumor volume with a special stamp, and a set of bookmarks. As her roommate writes, these gifts are meant to express Xiong Dun’s belief that “as long as you maintain strong faith and a positive attitude, there’s no difficulty you can’t overcome.”

Another crowdpleaser:  “Excuse Me 打扰一下” asked for 50,000 RMB (~$7800 USD) and they received 54,430 RMB, or 108% of what they wanted, as “dream-supporting funds” (养梦经费) to put out an album of original music. The super-produced documentary-style, soft-focus, Instagram-filtery pitch video highlights less the music (in fact, you have to go to Douban to hear some of their tracks) than the back stories of the three band members, and compared with the Kickstarter videos I’ve seen, is much more about fulfilling a creative dream against all odds. There’s a sense of young people running out of time, of wanting to make the most of the years before they have to face responsibilities, of impending adulthood that will cut off creative possibilities.  ”There are some things that you will never do in your lifetime, if you don’t do them now.” (Awkward translation alert #2! “有些事，现在不做，一辈子都不会做了”). The musicians give their ages (all under 30), talk about their path to music, and describe how awkward it is to reconcile their artistic dreams with the expectations of their families. “I’m worried, but my family’s worried too,” about how they will make a living and support a family in the future. “If I was married and had a kid, I might not be able to throw myself into this project in this way.”

As a side-note, this was one of 6 Demohour projects chosen by VANS in their VANS “rescue a dream” campaign from July 1 to Sept 30.  The company gives 1 RMB every time one of the special projects–examples of the “VANS spirit”–gets supported via a repost on Weibo. I can’t see Kickstarter getting away with this donation-as-ad tactic, but you never know. Indiegogo is more about charitable giving, such as the campaign to raise money for the woman who was bullied in the back of a school bus by the 5th graders she was supposed to be monitoring, which has raised more than USD $700,000 to date.

Then Jason chimes in with his thoughts…

In terms of design, DemoHour is pretty obviously a Kickstarter clone, down to copying its color scheme. Luckily Kickstarter’s had a recent re-design, but if you look at this Archive.org-powered screencap from earlier this year and compare it with DemoHour’s… 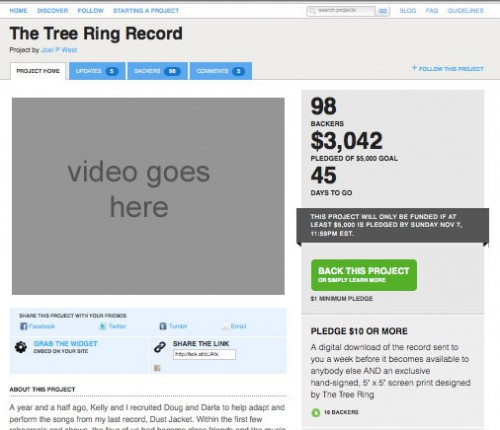 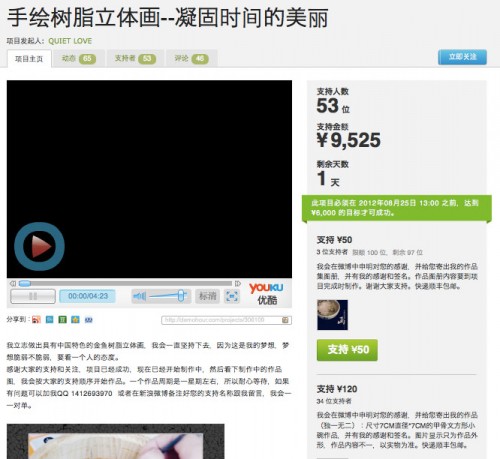 To put the copying in perspective: Co-founder Feng He is originally from China but was educated at Swathmore and Stanford, so “China’s culture” cannot take full blame for this. (Facebook copycat Xiaonei/Renren also sports a US-educated alum as its founder.)

Who’s to say it’s even a Chinese thing? European startups regularly copy US ones too. And of the crowdfunding platforms that Lyn mentions above, Brazil’s Catarse also follows Kickstarter’s design pretty closely (albeit less egregiously than the Chinese one): 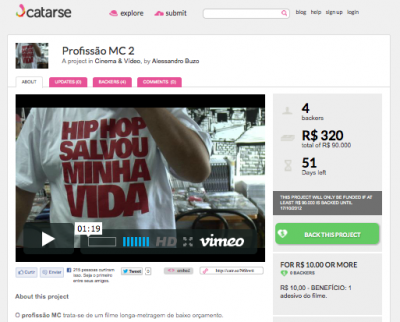 Whereas Australia’s Pozible is venturing out on its own, sporting different features from Kickstarter (though following the standard video-on-left, money-on-right  layout): 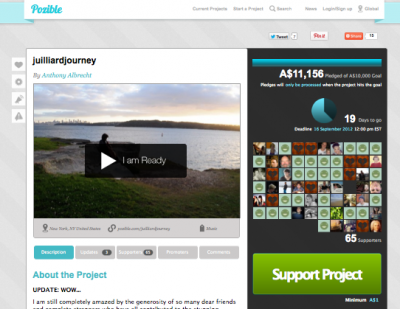 What’s sad in this case is that the one who dares to do its own design work suffers – Pozible has a slightly more confusing information design than the others, while DemoHour and Catarse suffer no consequences from copying a good design.