On June 4, I was invited to talk about middle class discontent on BBC World’s live program Impact. Since it was June 4, as a self-protection I again spoke optimistically about the future of Chinese middle class. The truth is even my friends and I, considering ourselves part of China’s middle class, often swing between extreme optimism and pessimism about the outlook of our career, life quality and the stability of Chinese society. As a media researcher, I have also been tracking what people say about China’s middle class on social media, again I found a lot of confusion and anxiety. 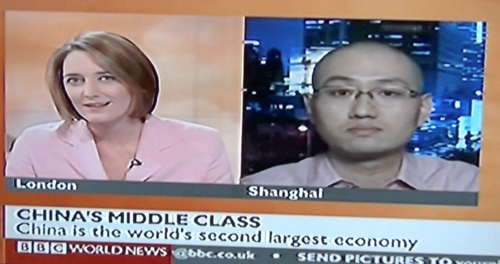 What does being middle class mean in China?

There is no clear-cut definition of Chinese middle class. Various institutions, from the Chinese government to the World Bank to market research firms have proposed different standards of middle class in China, but the meaning of middle class is multi-layered to the public. The most commonly used criteria is income, for example, Goldman Sachs in one of its reports set the bar for Chinese middle class at 9000 USD per year, while in 2005 an official report from the Chinese government said that anyone making 60,000 yuan to 500,000 yuan per year should be considered middle class (By either standard, less than 10 percent of the Chinese population fit in).  But in my research I find most people think being middle class means much more than a certain level of income. Unfortunately many of the Chinese people who meet the income criteria don’t think of themselves as middle class, because they feel that the burdens of life are so heavy that they are still surviving rather than enjoying life, they lack sense of security and they are pessimistic about upward social mobility in our society.

First of all, living cost is rising fast in China. In big cities like Beijing, Shanghai and Guangzhou, typical middle class consumer products, from Starbucks coffee to Levis Jeans to iPad, are usually at least 30% more expensive than those in the US. Even IMAX movie tickets are about the same as those in the US. So obviously not many Chinese can afford the Western-standard middle class life style, as the average income of Chinese white-collar workers is only one sixth of that of their American peers.

Enough has been said about the high prices of apartments in China’s big cities. In my city Shanghai, an average apartment costs more than 20,000 yuan per square meter (the downtown area costs several times more), while an average white-collar worker here makes less than 10,000 yuan a month. But not many people can choose not buy an apartment. As I have written before, home ownership is not only the primary store of wealth, but also a spiritual needs, an ends in itself and the ultimate pursuit in today’s Chinese society. Owning an apartment, however tiny, is the foundation of love and the premise of marriage. Disputes over property are also breaking up many relationships and families. For Chinese young people, choosing not to buy an apartment involves being seen as a loser, an untrustworthy, unstable and even unloved person.

But once you buy an apartment, you and even your whole family probably will become “the slave of the apartment”. With all your savings gone and heavy loans to pay back every month, you can hardly afford to spend or play.

What makes you feel worse is the perception that even if you work hard and keep improving yourself, you will have little chance to move upwards. That is the sentiment I often observe in many Chinese young people. They call this the age of “father competition” (拼爹), meaning that only those from the right families can succeed. I don’t think it’s too pessimistic to say that the uninhibited marriage between power and wealth has almost eliminated fair competition in our society, for example, many companies I know prefer to hire children of government officials, you know why.

Sometimes the basic sense of security is missing even in the young professionals of China. Most of my peers are now in their thirties and already have a good career, financially they are much more secure than the new college graduates who can hardly find jobs, but they are worried about health care and the care-taking cost of their aging parents. The parents of us “single child generation” are getting old, in a few years most of them will retire, that means each young couple of “single child generation” will have to take care of four parents. With the miserable health care and social safety net in China, how dare the young middle class consume rather than save?

Reasons to be Optimistic

The wealth and power of China’s middle class might not have increased as that of the oligarchy and crony capitalists, but their knowledge and skills have increased tremendously thanks to their integration into the global workforce and new sources of information online. I don’t see any skill gap between China’s young professionals and their Western peers, yes sometimes they don’t seem very creative, but it’s usually due to the environment rather than their lack of creativity. Precisely because I observe how China’s middle class struggled in an extremely extractive economic system in the past several years, I’m optimistic about their ability to adapt to the tough years ahead and make things better.