Lei Feng.  He’s like a 20th century, Chinese Cincinnatus (minus the part about being an emperor), a humble servant of the people.  An early member of the Communist youth corps, Lei joined the People’s Liberation Army and died in his early 20’s when a telephone pole hit him on the head.  It was the 1960’s, in the midst of the Mao era and the launch of the Great Leap Forward, and the propaganda machine picked him up as a self-sacrificing man of the revolution and the party urged citizens to “Learn from Lei Feng.”

In 2011, the party has been trying to revive Lei Feng.  A recent article in the Irish Times looks at the revival:

Now, faced with a moral vacuum left by years of breakneck economic growth at all cost, the Chinese government is keen to mobilise the spirit of Lei Feng to help give a moral dimension to the country’s rise.

“As our society has developed we’ve seen the loss of good faith and distortions in our values,” Luo Shugang of the propaganda department of the Communist Party’s Central Committee told local media.

“To solve these issues, we must look to Lei Feng,” he said.

Naturally, it’s the internet age, and while many are earnestly trying to learn from Lei Feng’s examples, many are not, and they’re quite vocal about it.  Before social media, it would have been difficult to find these voices amidst pro-party posters and slogans. Memes and jokes have spread throughout Sina Weibo mocking Lei Feng and the propaganda machine.  The New York Times has a good overview of the cynicism that can be found on Sina Weibo:

But the party’s efforts to resuscitate the spirit of Lei Feng on the 50th anniversary of his death have exposed the limits of old school propaganda in the age of the Internet. The campaign, which culminated Monday with the annual “Learn From Lei Feng Day,” has provoked a fresh round of public cynicism about a ruling party that is struggling to cultivate a sense of legitimacy.

The familiar lessons about Lei Feng’s feats and thoughtfulness that have inundated newspapers and television have been met by snickers, expressed through essays, cartoons and blog postings that highlight the government’s failure to practice the idealized morality it seeks to propagate.

Lei Feng’s face has been remixed as part of this cynicism. I’m sprinkling in a few images I’ve culled together, but one joke in particular has been circulating pretty widely: “Just call me Lei Feng” (就叫我雷锋吧).  The story of Lei Feng’s selfless devotion and anonymity has been turned into a joke about a one night stand:

She opens her eyes.  Yesterday night she was drunk. She slept on her own bed at her own house.  The man who she met has already put on his clothes and is opening the door to go. She is suddenly sad and she says, “I still don’t know your name.” The man turns his head and laughs softly, “Just call me Lei Feng!”

—The whole country once again rises up to learn the Lei Feng chorus!

“Rising up” is an obvious euphemism, and “chorus” can also mean “orgasm.” And so “Lei Feng” became a joke about a one night stand. Users have been reposting the joke, including any number of just barely safe for work images.   Hence:

And many many others that are certainly not safe for work.

But it’s important to note that the propaganda has been in many successful, as I’ve also encountered a number of sincere-sounding posts about Lei Feng.  This is a good example of a political meme that goes both ways, promoted by the party and then remixed by cynics and supporters alike.  I don’t understand all the jokes or the cultural nuances, but here are just a few: 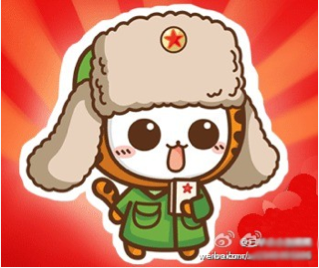 The super hero theme emerged as well, re-envisioning Lei Feng as a superman-like character flying around: 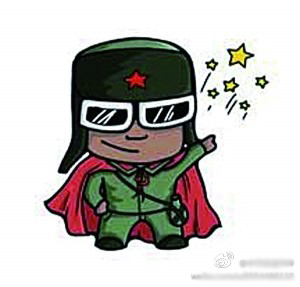 And of course, not all images are critical in and of themselves: 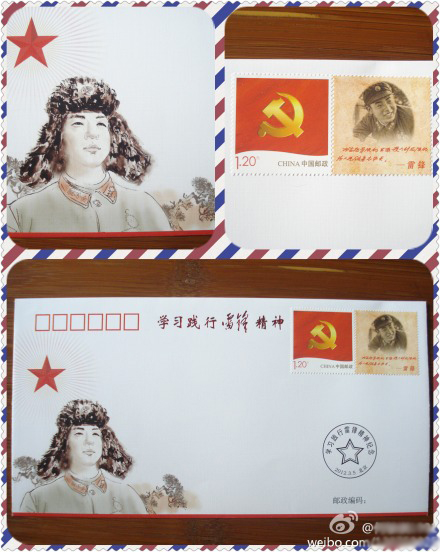