CCTV is going global, and its launch in America has been getting a great deal of attention, with competitive pay and locally-controlled media.  According to a report on the Voice of America, Western journalists have considerable freedom so far.

What’s been getting less buzz is CCTV’s launch in Africa, to be based in Nairobi.  I’ve seen two advertisements on YouTube.  The first, embedded above, positions CCTV as a Chinese news agency based in Beijing and working in partnership with local African journalists.  Another one focuses solely on African journalists and doesn’t clearly identify CCTV as a Chinese agency:

But while Google news results as of the time of this posting revealed only three articles about CCTV Africa, the station’s launch in the continent comes with increased investment from Chinese companies.  Chinese soft power in America still stagnates, but it’s become a major economic player in Africa.  The new headquarters of the African Union, based in Ethiopia, is a gift from China.  The gift is highly symbolic, even while the AU may not have much influence yet.  And it reflects broader investments. A report in April from The Economist revealed that

Indeed, China has boosted employment in Africa and made basic goods like shoes and radios more affordable. Trade surpassed $120 billion last year (see chart 1). In the past two years China has given more loans to poor countries, mainly in Africa, than the World Bank.

An even more recent essay from The Diplomat highlights China’s most visible move in Africa, which is the development of much-needed infrastructure.

Finally, China’s major trump card in competition with other emerging economic stalwarts from Asia and Latin America as well as the traditional European and American powers in Africa is its seemingly untiring capacity to change Africa’s infrastructural landscape. In a recent interview, an Angolan state minister compared the responses of China and the West to helping repair the country’s post-war infrastructure. Whereas the West came with a conditional offer, China offered immediate help with the needed infrastructure. This seems to be a recurring storyline around the African continent. There might be a whole debate about the ratio of African to Chinese workers at these construction sites as well as the “real or hidden costs” of these infrastructures, but there is at least one undeniable fact about Africa’s need for infrastructure, and that is its immediacy.

It’s within this context that CCTV Africa emerges.  The launch, for now, appears to be small, but with greater ambitions.  According to The Africa Report, “For the time being the channel does not broadcast more than its one hour of African-targeted TV-shows a day, but the plan is to become a fully fledged news channel. . . . On more long term basis, the company is planning to open no less than fourteen subsidiaries in Africa, including North Africa.”

Can Chinese news media compete with international powerhouses like CNN and BBC, or even with lesser known but still respectable outlets like ITN and VOA?  I venture it relies on how much the channel takes a Chinese-style approach to media, with a heavy bureaucracy and one-sided views that support the party.  Here’s a telling example from a recent story about a Chinese fisherman who killed a South Korean coast guard officer.  Reporters were ready to break the news.

Instead, according to CCTV employees, the story languished for hours as editors awaited political guidance from above, while would-be competitors such as Qatar’s Al-Jazeera reported extensively on December’s attack.

The African Report already points to a heavy hand, with one anonymous source reportedly given a list of sensitive words like “regime” that they shouldn’t use on air (granted, most news outlets have style guidelines as to acceptable language on air).  And Xinhua, which launched in New York with great fanfare, has yet to be taken seriously by Americans.

I got to thinking about another angle: if CCTV loosens its media restrictions, it could become a boon for ambitious Chinese journalists chafing under media controls on the mainland.  I’ve spoken with a number of youth in China who want to study journalism but who mumble to me later, “But it’s not so easy here.” 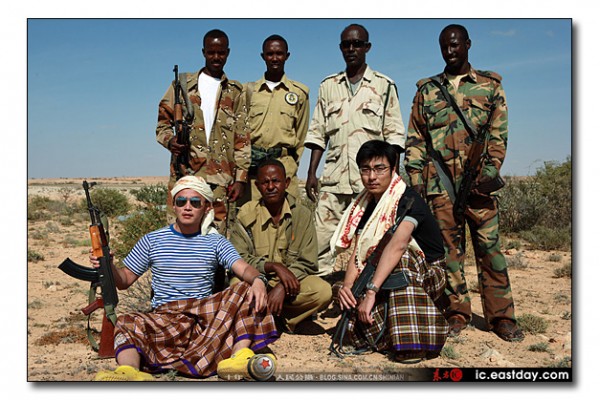 In Africa, Chinese journalists can find an outlet for their training.  Consider these young journalists who gained an interview with Somali pirates. Their faces reflect something I rarely see from China-based journalists: their ambitions and excitement.  The more that talent moves to CCTV Africa, the more likely the channel will grow as an outlet in Africa and on the world stage.

And remember: It wasn’t that long ago that a small, upstart news agency quietly came out of Qatar.  The state-supported Al Jazeera today offers round-the-clock reporting, and its English site reaches some 100 million households. The direction CCTV takes globally is anybody’s guess but it’s well worth paying attention to.

3 comments on “CCTV Africa: Chinese Media Into the African Continent”