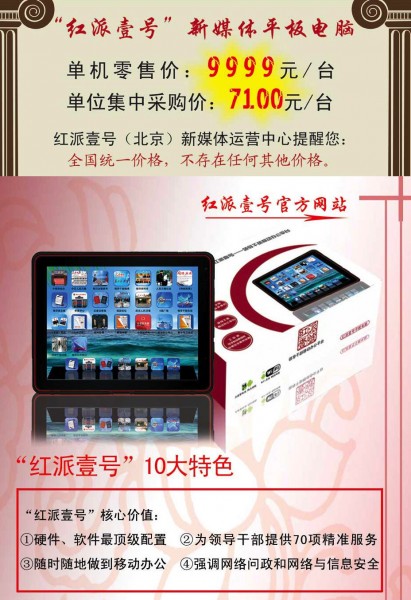 Can innovative entrepreneurship prosper in state capitalism? A Beijing company called Red Technology （红派科技） said “Yes” and announced its new product that aims to rival the influential iPad: the RedPad, a pad tailor-made for the Chinese government officials. The innovation of this RedPad does not lie in its hardware or software, it looks no different from other pads and runs on the Android system. What makes it stand out, according to Red Technology, is that it offers a unique information service that helps government officials to read the minds of top leaders of the central government and stay informed about public discussions online, also, it guarantees complete online privacy of its users.

The RedPad sells at 9999 RMB each, twice as much as the price of iPad in China, though it offers a wholesale discounted price of 7100RMB to government institutions. Why would Red Technology think officials will pay such a hefty price for a copycat product? I think we should not under-estimate Red Technology’s ingenuity, at least, it has the profound insight that Chinese government officials live in a completely different world from common people, so of course the Internet means something completely different to them than to common people. The RedPad’s selling points indeed meet the specific demands of officials: to know what their superiors are thinking, and to control what their inferiors know and say about them. And high price is not an issue for people who are spending other people’s money. In RedPad, we see the kind of innovation that truly matters in China: Creative Ass-kissing, and the perfection of an established business model of state capitalism: privatization of public money.

But a wonderful concept does not necessarily leads to a successful business. RedPad might fail simply because it is not able to deliver what it promised to its spoiled customers. So far, what RedPad calls “special information service” is simply aggregated content of propaganda media, from People’s Daily, to local government subsidized newspaper like the Harmonic News of Shanxi. This is far from a secret weapon for savvy officials to watch the trends in the political elite circle.

The resume of Red Technology’s CEO, Liu Xian Ri (刘鲜日), does not invoke much confidence either. Liu was a journalist of People’s Daily during the 1990s, but later he devoted himself to the cronyism business. His last project was the so called “China Network of Internet” (中国网联网）， which aims to be the integrating platform for all the “official” websites of China. Though Liu claims that over 1000 websites of party-organs have joined his website, w010w.com.cn, the website can no longer be opened. Liu also claims to be a PhD from the American United University (美国美联大学）.Though this American United University has quite many alumni among Chinese officials, it is also notorious for skipping the education part and selling diplomas online at a price so low that its Chinese competitors can only envy.

The RedPad’s most controversial feature is the so called “advanced privacy protection”. Many Chinese netizens vented:” Why we have to comply with the new real name registration policy for micro-blogging, while officials’ privacy is protected?” But, we need to understand privacy means different things for officials and common people, actually, the privacy of officials hinges on the lack of privacy of common people, meaning they need to limit what people know about them as well as what people know about the world.

Red Technology’s Liu has unusual sociological imagination, he sees clearly that state capitalism has produced a special class of power elites, government officials mostly, who control most of the country’s political and economic resources. The RedPad is a joke as a consumer product, but my worst fear is that it might turn out to be profitable for its producer, as previous jokes like the Green Dam software did; what kind of system of incentive would that be!