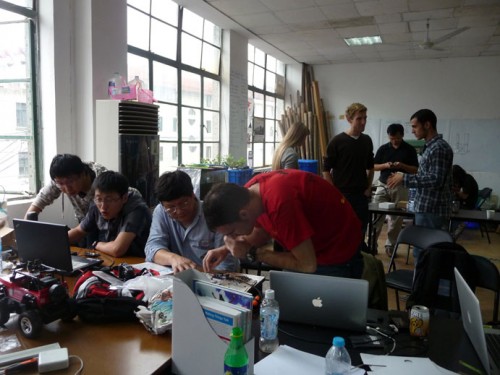 I came across this article recently on hackaday.com, talking up the possibility of new hackerspaces in China:

Government leadership in Shanghai wants to build 100 community hackerspaces funded by the Chinese government. Each space will be at least 100 square meters, open 200 days a year, and come equipped with wood and metal lathes, saws, drills, grinders, mills, and more electronics than we can imagine.

It’s an intriguing prospect.  It’s become commonplace for media to ask when China will have its own Steve Jobs (see here and here).  The most frequent reply is that China, with a censored media environment and an education system that discourages critical thinking, is a long way off from producing innovative thinkers.  Until recently, I also agreed with both points.

But then one day I visited the Makers Carnival at the Beijing Institute for Petrochemical Technologies to give a talk.  I was thrilled by the number of hacked inventions, from swimming robotic fish to airborne weather detectors. During my lecture, I found the students, who came from many universities around China, to be critical and engaged with the ideas I presented on social media and art.  But more importantly, as I toured the different booths, I found the students to be excited to present their creations to me and talk about the pros and cons.  They were critically engaged, active learners and developers, and they were making things I could only imagine doing.

I chatted with David Li, who founded the Shanghai-based Xinchejian (pictured above and below), China’s first official hackerspace. “Most of global hackerspaces are operated as non-profit membership driven to balance between the membership and public access to the space,” he explained. “The government sponsored spaces can be more public accessible.” 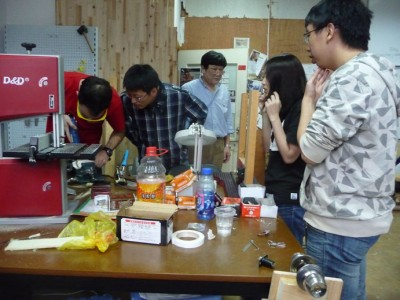 Indeed, while hacker communities I’ve seen in both the US and China are ostensibly available to the public, they are in practice usually patronized by a small collective of people.  This is great for community building but not always for the wallet.  Most spaces have to charge a membership fee, thus cutting out a swath of the population that may not be able to afford it.  That swath almost invariably includes students.

Li pointed me to an intriguing piece in MAKE that argues for more publicly-accessible hacker spaces, like a library: “If the only public space where 3D printers, laser cutters, and learning electronics happens is in fee/memberships-based spaces (TechShops, hackerspaces), that will leave out a segment of the population, who will never have access.”

Of course, with government sponsorship comes government oversight. Can true innovation happen in this kind of environment?  My take is that providing tools and resources is a great first step.  Few people have access to large workspaces, a community of like-minded makers and mentors, and expensive tools like laser cutters and 3D printers.  Giving them that access can spark their thinking at the very least and help encourage a culture of making early in life.  Let’s hope this plan pushes through.