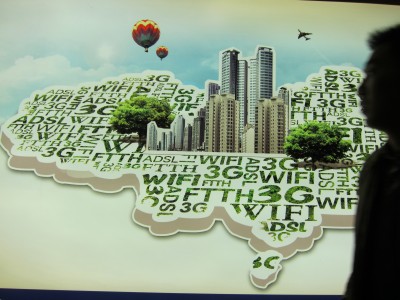 China telecommunications expert, Marc Laperrouza, tips us off to an unconfirmed bit a of juicy news about the Chinese telecommunication market: China Telecom is being investigated for anti-monopoly infringement! You don’t hear of state-owned enterprises the stature of China Telecom being investigated for monopoly infringement very often so this is pretty big news. Mark explains the charges:

Its sin(s)? Abuse of dominance in the broadband market or more specifically charging other broadband service operators discriminatory network access fees. For those not versed in competition law jargon it means that the company is taking advantage of its position in the market to squeeze out competitors (usually by forcing them to resell services to the final customer under the cost of production).

But like Mark, I am very curious why China Telecom? Is just doesn’t make sense.

But it appears that in more recent news, China Telecom and China Unicom have been pressured by the anti-monoplogy probe to release statements admitting that they were improperly charging customers and would increase broadband speed. We have an explanation from, Li Qing, China’s National Development and Reform Commission’s  deputy director of the commission price supervision and anti-monopoly department:

These two companies clearly occupy a dominant position in the market…They use this dominant position to charge their rivals higher fees while offering favorable prices to companies that are not competing with them. According to antitrust law, we call such behavior price discrimination.”

And as with most monopolies, companies do not have incentives to offer optimal services. China has some of the slowest broadband speeds in the world despite having the most internet users out of any country. Anyone who has lived in China has become accustomed to slow internet speed.

But even governments needs incentives to break monopolies. The question is, why now? Is is possible that the government now sees the economic incentives to speed up service? Star Chang at Micgadget seems to think so:

An investment banker who cannot send an e-mail to his client or a supplier who cannot reach his buyers are a few examples of potential money loss that occurs on a daily basis. China Internet business will constantly need to deal with internet speed problems, a situation which is a loss for China and for the world. A huge population with fast internet connection speed will help drive innovation and will put China on the map as one of the most attractive business locations in the world. China must provide with faster and freer internet connection, making easier for people in China to engage in global business and to connect with the rest of the world.

But anything that involves faster access to any types of information comes with strings in China. I’m wondering how information will be filtered in an era of faster and more accessible internet? Earlier this year, Kaiser Kuo and others joked that we should all move to Chongqing  for the first International Cloud Computing Special Zone:

The special zone, covering about 10 square kilometers, is the only area in China that is directly connected to the outside Internet through optical fibers without being filtered, according to the Southern Weekend.

Kaiser’s joke points to something that would be good for all of us to keep an eye on – that is the future of cloud computing in China. Faster and more affordable internet can only get so fast if China’s internet infrastructure does not switch to cloud computing. But Jin Ge and I have been discussing the viability of home-grown cloud computing when Chinese netizens have low trust in cloud services from Chinese providers. When it’s already known that your information online is surveilled in China, who will be willing to save even more personal information online? According to Jin Ge’s latest article on China Bubble Watch, Cloud Computing Turned into Real Estate Business in China, no one is putting any information on the cloud servers. He points out that that the popularity of cloud servers are actually part of the real estate machine in China:

The first thing people should know about cloud computing in China is that it is again driven by state capitalism. Once the technocratic officials of China become aware of the concept of cloud computing, they immediately see the potential of applying their magic formula of “fixed asset investment+government subsidy+cheap loan” on it, because after all cloud computing does involve some large physical infrastructure. The story is quite similar to what happened to the concept of “Internet of Things”.

In April 2011, the government of Chongqing became the first to annouce its plan to invest 40 billion yuan on a cloud computing center that will be the largest in Asia. The plan is called “Yun Duan” (Top of Cloud). Then Shanghai, Beijing, Shenzhen and Guangzhou all followed suit. Shanghai plans to build a “Asia Pacific Cloud Computing Center”,  its plan is called “Yun Hai” (Ocean of Cloud), Beijing has a plan called “Xiang Yun” (Cloud of Blessing), Shenzhen has a plan called “Kun Yun” (Cloud of Flying Fish), Guangzhou has a plan called “Tian Yun” (Cloud of Sky), Ningbo has “Xing Yun” (Galaxy Cloud), Wuxi has “Yun Gu” (Cloud Valley), Hangzhou has “Yun Chao Shi” (Cloud Supermarket) ……

If Jin Ge is right, then we will see a cloud-computing bubble accompanying the yet-to-come real estate bubble.

From the clouds to the ground, 2012 looks like it’s going to be an exciting year for mobile  industry. China Telecom is going abroad to offer mobile services for the transnational elite who travel between China and North America. China Unicom just launched a new mobile internet platform, the Wo-plus Opening System. Let’s see how long China Mobile 600 million 2G users can wait for 3G before switching to Unicom or Telecom. Now that China is the world’s largest smartphone market, how will the future of hardware and software evolve? We already have a glimpse from HTC of their new Sina Weibo smartphone. And then to top if off, both China Telecom and China Unicom may lower broadband prices!

With all these technical and market changes, one of the big questions for 2012 is will Chinese citizens will be relieved of telecommunications costs? Or will 2012 could be the equivalent to the 1996 Telecommunications Act in the United States where institutions benefited more from telecommunication reforms than individuals? [1] We’ll have to see who benefits from thee anti-monopoly investigation.

With the stable divisions of China Unicom, China Mobile, & China Telecom, we don’t hear of potential industry shake ups like this very often. I imagine that Chinese Telcom scholar, Eric Harwitt, is giddy with news. But luckily we have  Marc Laperrouzag, so we won’t have to wait a few years for a book or paper to be published to stay up to date on the details.

[1] In my analysis of the US 1996 Telecommunication Act, I argued that the act did little to democratize communication for individual citizens. It failed to add Internet access to the scope of communication mediums covered by the Act; placed additional economic burdens on individual telephone subscribers; and auctioned off the spectrum of bandwidth for wireless services to the most wealthy telecommunications companies, who in turn charged high rates for wireless services to recoup costs. The act established the Universal Service Fund (USF) which mandated companies to create affordable telephone access, not information access, for individuals. While the USF was aimed at telephony services for  individuals,  E-rate, a sub-programof the USF, subsidized Internet access for schools and libraries, not individuals.

2 comments on “Gossip from the trenches of China’s telecommunications market: changes to keep an eye on in 2012”