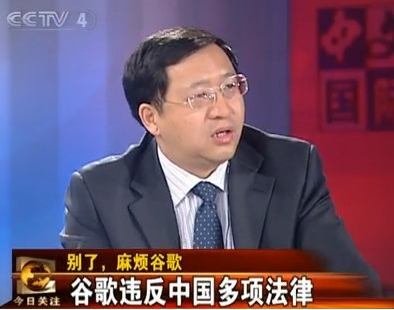 Dr. Fang Binxing, an academician of the China Academy of Engineering who was one of the main designers of the infamous firewall confining China’s Internet, presented his new theory on Internet Sovereignty and reiterated his view on the importance of “border control” on the Internet, at a conference called “Innovation and Development of China’s Internet Forum” on November 11th.

Dr. Fang was often called “the father of China’s Great Firewall” and his unapologetic advocation for Internet censorship made him one of the most hated figures among pro-democracy netizens. When he was giving a speech in Wuhan University in May this year, a student threw a shoe at him, and there was heated discussion in various pro-democracy online forums over how much damage Dr. Dang did to the Internet in China.

Though I was quite familiar with Dr. Fang’s view, I still didn’t expect he would go so far to envision an Internet that consists solely of territories of nation-states, which can sometimes become battle fields between nation-states. In his elaboration of the right of independence, Dr. Fang envisions an Internet in China that can exist outside of the global Internet. The right of equality, as Dr. Fang describes, essentially means that the “Internets” of different nation-states can have diplomatic and business connections. In Dr. Fang’s words, “it’s just like airline traffic across borders”.

When Dr. Fang talked about the right of self-dense, his nationalistic sentiment became ever more salient. I doubt he believes in any kind of shared public interests of international communities, all he can see is a world in which nation-states compete for supremacy and self-interests. Dr. Fang compared the national rivalry of Internet to that of nuclear competition or space war, and he emphasized that we have to protect our virtual space just like what we do with our land, sea or sky territory. Dr. Fang sees so many national enemies that are just waiting for any chance to attack China’s Internet system, that he believes only an Internet of total isolation is truly capable of self defense.

Among all the mind-boggling things Dr. Fang said, what shocked me most was his explanation of the right of jurisdiction. He lamented that our Internet does not have the capability to disable a global Internet service whenever desirable. He used the example of Google and said it was a pity that although google had retreated from China but its service was still accessible in China. “It’s like the relationship between riverbed and water. Water has no nationality, but riverbeds are sovereign territories, we cannot allow polluted water from other nation-states to enter our country”, said Dr. Fang.