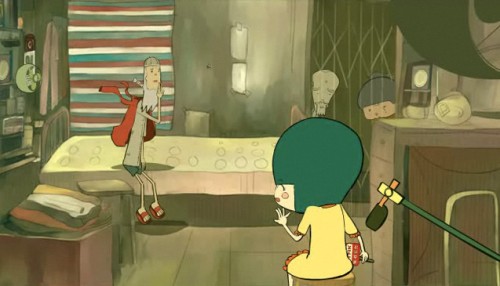 The Postgal Workshop (猫室) has become the champion of homegrown animation in Hong Kong. Its recent comic book and animated shorts series, Din Dong (癲噹), went from being a local indie favorite to being aired on Japanese TV. Din Dong is a parody of the popular Japanese cartoon, Doraemon (ドラえもん). The characters are named after those in Doraemon (in fact “Din Dong” is a pun on what Doraemon was called in Hong Kong before its phonetically correct name change in 1999) and the story is set in an ambiguously Asian village beset by the financial recession.

Despite an interesting premise, Din Dong, like many of the Postgal Workshop’s animated works, suffers from mediocre writing, relying way too readily on cute gags and silly endings. When applied to ads, as it was for Hong Kong’s blockbuster apm shopping mall, the animation thrives from its unique look and feel. When applied to story-driven works like Din Dong, the writing and dialogue feel out of sync with the exceptional Postgal animation style.

Advertisers employ Postgal to make sure they connect with the young demographic. I suspect RTHK (the social issues, government-funded broadcasting organization in Hong Kong) reached out to them for the similar reasons. In 2008, they commissioned Postgal to create an animated episode of their Hong Kong Connection (鏗鏘集) documentary series. This unlikely collaboration created one of Postgal’s best works to date by forcing them play serious and incorporate new voices.

The animated episode is called Hidden Elders (隱蔽老人) and describes the plight of forgotten or “hidden” senior residents in Hong Kong. The juxtaposition of serious subject matter and frivolous animation style livens up a normally-dry subject matter. Additionally, the sequencing and writing adds a surprisingly effective layer of wit and charm. On the other hand, weaknesses in writing do remain in a few spot (don’t tell me I didn’t warn you about the vapid Star Ferry reference at the end) and there’s a dearth of information about which aspects were fictionalized and which weren’t.

Despite its shortcomings, Hidden Elders is a joy to watch, and captures the city of Hong Kong in spirited cartoon form. It definitely meets its goal of making Hong Kong Connection accessible to new audiences, while spinning the documentary formula on its head. For its efforts, Postgal was awarded the Grand Prize at the 10th Tokyo Broadcasting System’s DigiCon6 Awards in 2008.

And guess what? We’ve subtitled the full episode of Hong Kong Connection: Hidden Elders in English for your viewing pleasure below.

One comment on “Animated documentary about elderly in Hong Kong”