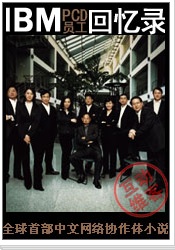 The first Chinese “wiki book,” written by an online collective (see this WSJ article on wikibooks), is garnering attention in virtual China.  Named “IBM Mafia” (The Memoir of former IBM PCD employees) IBM个人电脑事业部员工回忆录, the wiki book was written on Chinese wiki site hoodong.com‘s open source wiki software, HDWiki.  It is getting hot on the most popular portals: SINA, QQ.com and Sohu.  The book looks to be a must-read for anyone who wants to understand the development of Chinese IT elites, their attitudes toward work, career, and global IT brands, and Chinese global technological ambition from the inside. Rather than a group-edited piece, it’s more like an anthology of former IBM PC Division employees’ experiences.

Imagine if the site grows as an archive and we see hundreds of people’s stories being recorded?  I think it will.  Many Chinese people are
willing to participate in organized group events, and there’s such a
need for a place to reflect on the social changes of the past 20 years.
This could be a model for other organizational archives: how about a首钢
Capital Iron and Steel wiki book?  Or a Chinese Academy of Social
Sciences (CASS) wiki book, with entries from all over the world?

Here’s how the book is described on its homepage:

The Memoir of Former IBM PC Division Employees was written and edited online by over 100 former IBM employees, using the HDWiki system.  They were all IT elites from IBM, and the majority were from IBM’s Personal Computer Division.  The memoir realistically represents work life at IBM.  The work is divided into six sections: Section One, The Old Me, records the studies, work, and daily lives of the employees before they began work at IBM.  Section Two, In the Proximity of Giants, introduces how employees entered IBM,  what the interview process was like, and how they were trained.  Section Three, Personal Transformation, describes how these IBM employees continued to study and grow, changing from green youths to seasoned salespeople, managers, and technicians. Section Four, Work: Bits and Pieces, records scenes and events from each person’s different work experience.  Section Five, Acquisition of the Century, records each person’s experience of the acquisition of the century.  Section Six, The Road Ahead, describes everyone’s work and life after the acquisition.  This book is the first time that nearly 100 IBM PC Division workers have gathered together; this true record, and set of lessons they’ve drawn from their experiences, is vivid learning material that will be hard for young people to find in their careers. The entire division used hoodong’s wiki platform to write together online; 100 IBM employees from around the world used Web 2.0 methods to record their youth.

A new introductory section has been added after the above intro was written, which makes all the others one chapter later in the book.  Hopefully the project will develop with time and media attention.  There may have been something like 100 IBMers working on it, but some of the sections are pretty light at present.  For instance, “The Old Me” section has three entries: two stories (“The Distance from Baoshan to Pudong,” “Goodbye Botwave”) and an essay (“An IBMer’s Early Life”), each of which look readable and interesting.