Suezanne Baskerville is tracking both Second Life and HipHi (China’s own Second Life-like game) on her blog.

The latest entries surround HipHi’s hype in Newsweek International that led to a public beta, and before that various resources (forums, screenshots, walkthrus) on how to get around in HipHi in English.

And of course, some experiential posts such as, “How do you delete a fire in HipHi?” 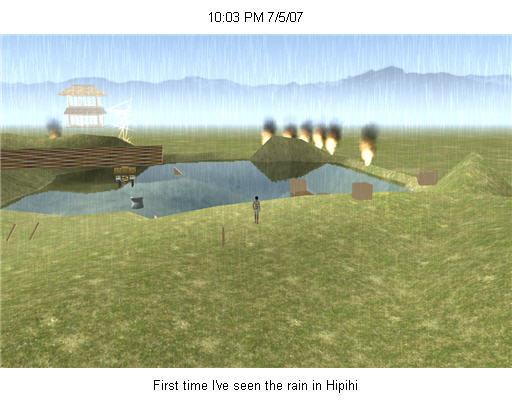 Linked to from her posts, I found:

A great quote from a post on an English HipHi forum, written by the administrators, asking visitors to vote on HipHi policies:

“The genesis of HiPiHi world has gone through three development stages, ‘Sundering the Heavens and Splitting the Earth’, ‘Nu Wa creates Humankind’, ‘The Heavenly Duke Creates the Things’. During those phases, we witnessed great changes in this world, and now we are stepping into another brand new era where the economic transaction system and social systems will be introduced, that is the ‘Mirage’ and ‘the advent of the social organisms’.”

With an interesting concluding paragraph:

“Netizens looking for raunchy sex will be disappointed—HiPiHi’s avatars can’t even strip nude. But Xu says there’s still a chance for romance; indeed, it’s already blossoming. One resident, ‘Wen Xi,’ the avatar of a woman from Hangzhou, apparently has several love interests—and she’s built a hip, bamboo-lined virtual bungalow for entertaining pals. She’s just the type of creative resident Xu and his investors hope will populate HiPiHi—but pioneers like her are scarce. Xu and Zhao have built a world. Now they can only wait to see if the Chinese will come.”