Was poking around Chinese video-sharing website 6rooms today and discovered a link (shown above) to the Chinese Animated Shorts Oscars!

I hunkered down and watched quite a few of them, which I’ll highlight before moving onto my conclusion: 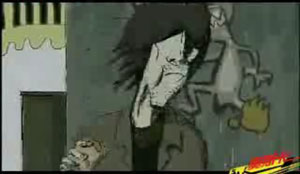 生活原来是这样的 (Life is Actually Like This), by students at the Beijing Film Academy, is one of the most popular and highly-rated shorts. It cuts between animation and live action a few times, features some pretty slick swerving camera shots, and is subtitled in both English and Chinese. The plot follows a chain-effect story, which is somewhat common within animated shorts.

花鞋子 Colorful Shoes, by the TianJin Academy of Fine Art, is my favorite pick. It’s a nicely produced claymation set in a village, and despite a threadbare plot, is incredibly evocative of a mood + scene/setting.

And then, screencapped above, a couple of shorts that didn’t really stick for me: A 3D bad guy plotting stuff; the Empress meets the first animators; and daddy loves his daughter. As you can see the production values were also quite a bit lower than the first two films. (In the animation world, that translates to a lack of time, a smaller team, smaller budgets, or less experienced artists.)

My conclusion? It’s looking up for animation in China — there are positive signs in terms of production values, plots and an air of experimentation. However, the work here still lags behind that of the top art schools, say, in the US.

The catch is which factor causes this lag: time spent, access to technology, technical skill, or “creativity”?