Big news from the Chinese hardware developer community: the release of several hundred Loongson boxes, Fulong mini-PCs produced by the Chinese company Lemote Technology Corporation, which are powered by the Chinese-developed Loongson 2E processor.  The Loongson boxes are now in the hands of several hundred die-hard programmers in Guiyang, Chengdu, Shanghai, and other big cities, according to an article tagged at Donews. The happy new users are talking up a storm at Lemote’s BBS (in Chinese).

According to Wikipedia, what’s especially notable is that the Loongson
chip is relatively powerful and uses relatively little energy. [Update: Glyn Moody at the Open blog says what’s important about this is: [First], the chip was designed and made entirely in China, making
the country independent of Western chipmakers; and [secondly], as
a non-standard chip architecture, the new chip can’t run Windows.
Which, means, almost inevitably, that it runs GNU/Linux. If China wants
to be truly independent, free software is the quickest and easiest way
to do it.]

“ubuntpku”, from Beijing University, has a couple of blogs called “My CPU is Loongson (Godson)!!!” here and here on the whole thing, where he writes:

The
CPU of Lemote Box is China-made Loongson (originally called “Godson”)
2E 666MHz. Although the frequency is low but it actually performs
better than PentiumIII. The Loongson CPU is a 64-bit MIPS III RISC
processor. Unlike x86 CPUs, it works under only 5-7W power(4.07W in
recent test), a small fraction of AMD or Intel products which generally
need several dozens of Watts.

Main
memory and HDD for Lemote Box are those formerly designed for laptops,
so the total power consumption is very small. Lemote Boxes may be the
best choice for citizens who would like to protect environment of our
Earth.

The first
batch released includes 1000 Lemote Boxes in all, 400 of which for
co-operative enterprises and 600 for Loongson fans. All of them are
used mainly for a testing purpose. Lemote said that they hope every
user who get a Lemote box help in developing Loongson products.

Actual performance of the China-made
CPU, Loongson, is still in question. Many(maybe a majority of) Chinese
themselves don’t think Loongson can catch up or just somehow
competitive with Intel or AMD one day in the future. Rationality is not
flooded by patriotism in this case. “Too slow! Pentium III 667 came out
many years ago!” A customer said when a reporter ask him if he would
choose Loongson.

Ubuntpku has also posted a series of fairly detailed video demonstrations of the box on Youtube–thanks ubuntpku!  Clearly the Loongson CPU/Lemote box have an enthusiastic fan base on the mainland.  Folks like ubuntpku have been documenting the progress of the little box.  (I couldn’t resist the blog post and photo below — doesn’t it look like something from the TV show Lost?)

Caption: According to the Official BBS of
Lemote, software developers finished transplantation of RV decoding on
Loongson CPU on Dec 15, 2006. Now MPlayer can play video in RMVB format. 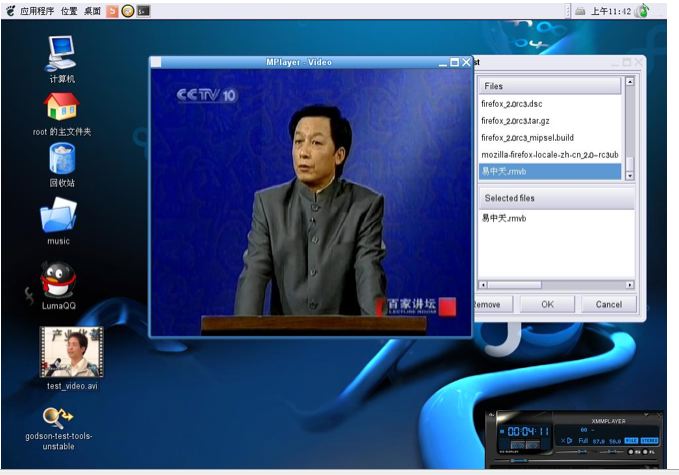