(Via ChineseInternetResearch)       Quacor.com — “The world first website for copyright movie absolutely free!” launched last weekend in Beijing.  You can download everything from Minority Report to Pepsi commercials with Chinese basketball player Yao Ming, to a treasure of Chinese films. Since I can’t download yet (the old Mac problem, I suspect), I don’t know anything about the quality.  English-language films are likely to be sub-titled; Chinese language films are likely not to be, is my guess.

Films are searchable (in Chinese) by actor, director, and genre (including something called “Internet movies,” which in this context is a bit hard to parse). The site also has an array of Web2.0 features, such as a forum for sharing self-generated film and audio content, photos, even creating one’s own blog.

You can download all of Jia Zhangke’s films, for instance, including the latest Still Life/《三峡好人》, about the submersion of an ancient Yangtze riverside town due to the Three Gorges Dam. The website provides reviews of the film, a timeline of Three Gorges construction, and more.  Still Life received the best film award at the Venice Film Festival this year. Now if they had subtitled English versions as well, this would be a great boost for Chinese film. 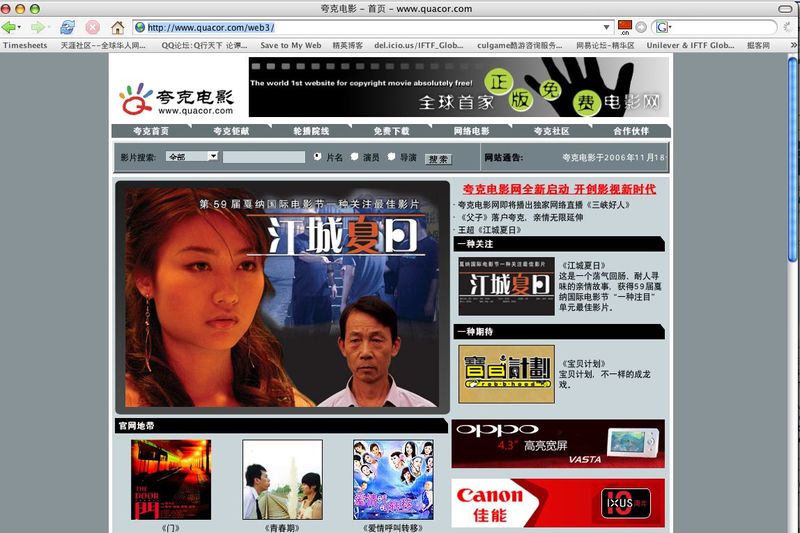 I tried to download Still Life and got an error message:

2 comments on “get it while you can: Chinese website for downloading free, legal movies”