“City 2046” 《都市2046》Chinese MMORPG officially launched on Sept. 26, after several months of beta testing.  The game takes place in a futuristic urban environment, obviously. It’s billed as “the first massively multi-player 3D online game set against an entirely realistic urban background,” but was alleged in the Chinese gaming media in July to be a copy of a Korean game also popular in Japan and Taiwan .   It’s run by Guangdong Data Communication Network 广东数据通信网络有限公司 and XOYOclan Development Group 潇遥族品牌, and there’s a huge focus on cool loot: stylish clothes, jewelry, fancy pets; and on generally getting to be rich. Kind of Sims Online-ish, if you know what I mean. Have not been able to find any stats on how many players there are, but this is not a WoW kind of launch.  It’s a little MMORPG launch. It’s not even on Baidu’s top 50 game searches for today. 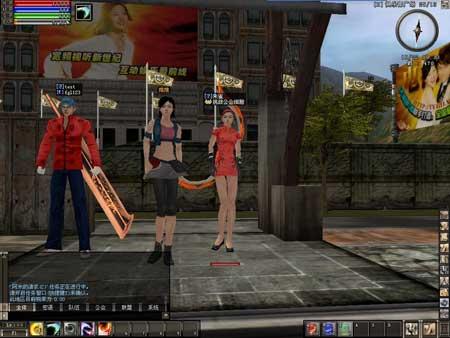 The weeklong National Day break, currently ongoing, is one of the most popular times of year to get married as it provides a state holiday from work and also comes around the time of the Mid-Autumn Festival. So City 2046 has offered a wedding service for players.  Virtual weddings have been going on for as long as there were environments in which to have them, so the wedding itself isn’t anything new.  But it’s nice to get a feel for what it looks like in one small corner of Virtual China. From the official announcement:

In the virtual city, feelings between people are real. We recognize and value these kinds of feelings. In order for lovers to become family, for the city’s lovers to enter the ceremonial hall, we’re holding a sweet and solemn ceremony. City 2046 projects group has specially provided new brides and grooms with veils and wedding clothes, invitations, and other kinds of marriage items. When you’ve decided where you’d like to hold a public wedding, would you like to give your special one a pleasant surprise?  Would you like to walk down the red carpet with your loved one in the golden October autumn? Would you like to have your buddies come and witness your love? Come now. We sincerely welcome you to raise the sign of your happiness, and to applaud your life!

We advocate a healthy, happy, humane game. We hope to increase the precious friendship and love between players through this activity, to support the creation of harmonious relations among friends, guilds, and even clubs. At that moment in the ceremonial hall, let us put down our weapons, all of our grudges and hatred, and toast the happiness of the bride and groom and set off fireworks to cheer them…

…We’ll provide the bride and groom each with a set of formal wedding clothes, as well as other wedding items including: 120 invitations each, 300 fireworks,  30 microphones each, and a set of wedding gifts for each, including 100 roses.  The bride and groom will also receive more wedding gifts from non-player characters (NPC) in the wedding hall itself including white gold earrings and necklace, a special card for friends, and 1 wedding ring (the wedding ring is permanent and cannot be traded for any other goods).

It all sounds so romantic, doesn’t it? But wait, there’s a catch.  Not everyone can get married. The game will only provide one set of wedding items, and one experience in the “ceremonial hall,” per “district” on each server (from the number of official wedding auction threads it looks like there are only 3 separate groups bidding).  Highest bidder gets the wedding experience.  Opening bid: Five million City Dollars 都市币.  The wedding auction is unrestricted–any player may bid no matter what his or her level, life points, or role–and the auction period is from 10/1 through 10/15.  But proposed weddings must only take place between a man and a woman avatar.  This is a long way from Second Life.

As of today, the bidding on one server was up to 61 million and they seem to be made mostly by men, or people writing as men:

Not everyone needs the fancy wedding though: one gamer writes: “I
just want to get married, not to participate in an auction.  My wife is
playing the game with me so we wanted to get married.” And one player wrote against the whole idea of the auctioned wedding, saying, “…think about it, what’s the use of a marriage system if in the whole district or the whole server there’s only one rich couple that can get married?” and, “Real love can’t be traded for money.”