For those of us who are interested in how people from different cultural contexts “see” things online differently–a different aesthetic, process of interpretation, set of referents, and so on–here’s my rough paraphrase and translation (in italics) of a fascinating article, “Brief Discussion of the Difference Between Chinese and English Website Design, by “Angela” on the idea-packed website Blueidea 蓝色理想, which focuses on web design.  Angela sets out her own theory of why you can’t move web design for English language sites directly over to Chinese language sites.  I don’t agree with everything she says, but her thoughts are provocative.

She begins by asking us to compare these two websites: Microsoft.com and Microsoft.com/China and asks, “Even though they use the same interface and configuration, don’t you think the Chinese site looks just a bit more chaotic?” Then she takes us through a step by step comparison of the two.

Starting with the menu: the Chinese menu looks more chaotic (though she doesn’t explain what she means exactly) and is longer than the same English menu. She enlarges a section of the menus to illustrate what makes it more chaotic: 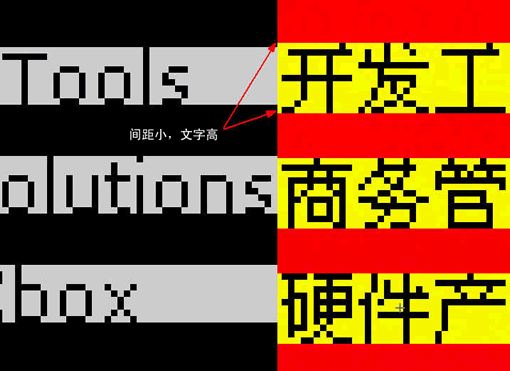 The Chinese characters are taller than their English letter counterparts, leaving less empty space (the red as compared to the black stripes).  It’s a small point, she says, but a critical one as the spatial relationship between color and text is what gives a website its look and feel.

Next, the issue is the difference between Chinese and English individual characters and the effect this has on design. She reduces the size of the two websites and turns the character spaces black so you can compare them better.

The English words, with their different numbers of letters forming a column, appear as a natural wave–a form that is closer to the “inner nature of language,” she thinks.

Rhythm and meter are one of the widely accepts rules of aesthetics…Chinese characters, however, are square shaped, with each character occupying the same amount of space on the screen. And at the same time we have a habit (perhaps it comes from Chinese proverbs?) of using 4 characters for most of the items on the menu.

She gives us several more examples of the “4 character” habit:

This “homogenous layout” can easily turn already highly normalized, square Chinese characters into an something like an iron bar. 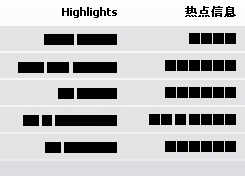 The characteristics of occupying the same, fixed amount of space for each character are shared by Korean and Japanese, she writes, but are worst with Chinese.

The last point: The “power return” at the end of each line of words
or characters works differently with English words than with Chinese characters.  Where the word is the
main design unit, words have different numbers of letters and therefore
naturally create a random pattern of white space, as opposed to Chinese
(or Korean) where the character is the main design unit and they march to the same
edge each time (unless it’s the end of a sentence). This, she explains,
is why so many Chinese websites look “crowded.”  Compare the two websites below, the same design but one in English and one in Korean, and the difference is clear.

Result: If you’re not careful, Chinese design can easily turn as a rigid as a bar of iron.

There are many ways to resolve the issues, Angela says, and suggests at the very least paying attention the the web designs of Japan and South Korea over the past few years.