Tropical Storm Bilis hit southern China over the weekend, killing over 200 people, flooding major
cities, sweeping away houses and cutting railways, power and water supplies. The BBS forums are full of first person reports and comments on the effects of the storm, as well as evaluations of offical responses.  You can clearly see how the BBS is acting as a space to trade concrete news about the status of specific areas, as well as about how to help those in need.

Daqi BBS reposted a Xilu BBS post titled “Bilis casualties not seen in the domestic media“, which shows 3 photos from Getty Images Editorial, complete with watermarks.  Interesting that some Chinese are using services like Getty Images to find out about breaking news through photos that might not appear in the Chinese media.

An earlier July 17 Daqi post has many photos of the flooding in Guangdong’s Shaoguan and Lechang including this one from Phoenix TV: 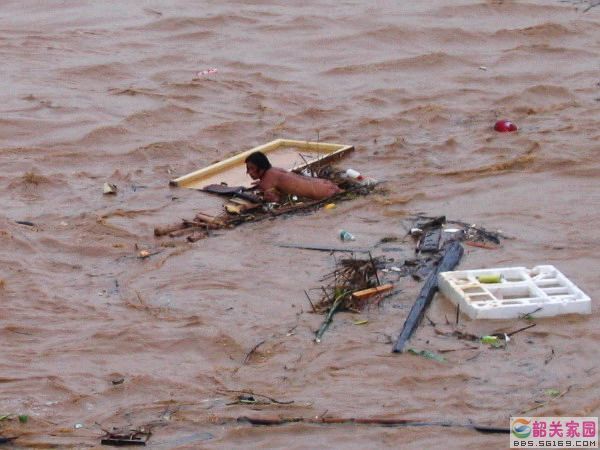 Excerpts from the comments:

This happens once every four years, which means four years’ time to prepare.  That’s proof that the water management engineering is incomplete. A big flood is great–the officials can not only express great love for the people but also spend lots of government funds, they can not only receive people’s gratitude but also make lots of false accident reports…

[July 18] Several continuous days of storming, I went back and checked the text messages I’ve gotten during this time: 1) July 15 noon, from Shaoguan Electricity Bureau; 2) July 16 noon, from Shaoguan Third Defense; 3)July 17 10 a.m., from Shaoguan Tourism Association; 4) July 17 7 p.m., from Shaoguan Public Security Bureau; 5) July 17 7 p.m., from Municipal Party Committee. Don’t tell me that there wasn’t any news before the water invaded? This is a serious dereliction of duty on the part of the city government! What are the leaders doing? Resting over the weekend? This time we’ve clearly seen the level of Shaoguan city leaders–they’re good at talking on paper but when they knew that the flood was coming they did not make the necessary preparations. They didn’t even protect important places like the water works.  And they didn’t appear beforehand to announce the truth to the people.  Most of the news this time came from the Internet.

What are you making noise about? Lechang isn’t Indonesia! [this is a rare negative comment]

[July 19] The first thing I’m going to do to take action against the tragedy is to repair and clean my and my friends and neighbors’ homes. You have to rely on yourself for these kinds of things.  Others help has its limits.

[July 19] It’s not cold outside now–is there enough food and water?

Everyone can go here for more news about Lechang.