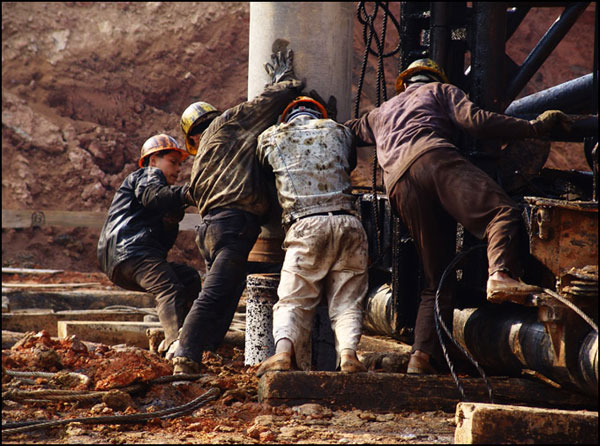 The May Day holiday, with May 1 International Workers Day as its center, is a time for Chinese throughout the country to consider the radical changes in ideas about labor and work.  Throughout the 1950s, 60s, 70s, and 80s May Day was a large-scale secular holiday that celebrated the labor of peasants and the proletariat with vast parades and nationally televised ceremonies.  You can see pictures of old-style May Day parades (a women in pigtails on a tractor, etc.) at this BBS thread.

Today, May Day is also the focus of government efforts to encourage consumer spending via domestic tourism–contributing to the nation by spreading the wealth.  The previous state-led vision of toiling farmers and factory workers is eclipsed by the new vision of a backpacking young urbanite or a wealthy family traveling to Beijing to see the Great Wall.  Not only is leisure seen as potentially as valuable as labor, but the kinds of labor that used to be held up as models are no longer valorized.  Most city dwellers have mixed feelings at best for the relatively poor, unedcuated migrant labourers who build their buildings, watch their children, and sweep their streets.

This makes May Day a potent moment for national discussions about work and its usefulness.  This Netease BBS thread showcases the old version of meaningful work: dirty, hard, and manual. The comments are mostly about respecting the workers:

Now those are real laborers!

Glorious laborers, we respect you!

Then there are series of photos of construction workers and farmers hard at work on May 1 itself.

Socialism has given nothing to the honest.

I’d like to go to all those tourist spots where all those people are eating, drinking, and making merry.  I suddenly thought of a question: who is really celebrating May First?

Have you ever thought about why they’re working on May First?  Because they have no choice! Because they live on the bottom rung of society!  Because they want to live like city people!

And in a perfect slice of Virtual China, a bikini (?) clad woman chimes in: Comrades, hard work.

3 comments on “May Day BBS: from labor to leisure”