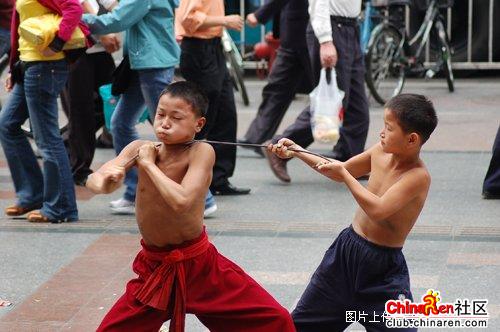 You never forget these kinds of itinerant street performers once you’ve seen them live. They present a mix of acrobatics, feats of endurance and strength, and qigong body control that allows them to do things like swallow a sword, or force a live snake through the mouth and out the nose.  Such performances, related to martial arts, have been going on in China for a long, long time (apparently sword swallowing showed up from India in about 750 A.D.).

Netease BBS (163.com) has a photo series of two such young performers in Shenzhen. The photographer says:

It was February 18, the Lantern Festival, at about 3 pm…I saw this pair of young performers doing tricks like twisting steel around their necks, wire bursting, sword swallowing, and aerial somersaults.  The scene reminded me of my childhood, when performers would come to the village every year. Those performances were a lot more complex than these, however, with performers bending backwards to nip a bowl with their teeth, and both “hard” and “soft” qiqong tricks…

This is so sad.

These two kids ofen perform right outside my office.  But there are so many of them in Shenzhen that nobody really pays any attention. Life isn’t easy…

I used to see a lot of this when I was little.  I don’t understand why there are still so many of them.

When they grow up I’ll hire them as my bodyguards.

We should not be giving them money, but asking the government to help them.

Your photos are pretty good.  But you don’t understand the situation.  There’s definitely someone behind them who’s in control.

Why aren’t they in school?  Why don’t the police pick them up?

link to photos and comments
link to chapter (in English) on Chinese “Juvenile Juggling” from 1901 book, The Chinese Boy and Girl