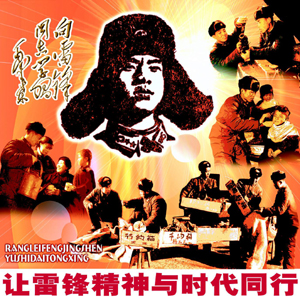 Danwei has a post on Chinese gaming giant Shanda Entertainment’s recent educational online game, “Learning from Comrade Lei Feng.”  Lei Feng was a model of self-sacrificing youth, held up by the Chinese Communist Party as an inspiration to millions during China’s Cultural Revolution.

Rather than beating bosses, players prevent crowds from wrong acts such as spitting, littering, and trampling on the grass, according to a CRI article.  Their reward? “When the four points, fame and loyalty rise to a set standard, we have
a chance to see Chairman Mao at magnificent Tian’anmen Square,” said a 12 year old Chinese player.

Broken Toys blog has a wonderfully detailed write-up, and Slashdotters have plenty to say as well.

What have Chinese net commentators been saying about the game?  Some (very roughly translated!) excerpted comments from the Netease 163.com conversation (in Chinese):

I think it’s a great game.  Some of our social habits definitely need to be changed, and perhaps this game is a good start…

Why not make a game where Mao Zedong is the lead character and it’s about liberating all of China?

Games are about entertainment and relaxation.  It’s not right to make everything about education.

How many parents have cried, how many homes have been broken, how many youth have destroyed their educational careers…while the businessmen laugh.  Online games are a drug like heroin, a form of social pollution, and should be eradicated.

What an idea! It’s harming our younger generation! Lei Feng would never agree with this! What a stupid idea!  It’s all just to make money!